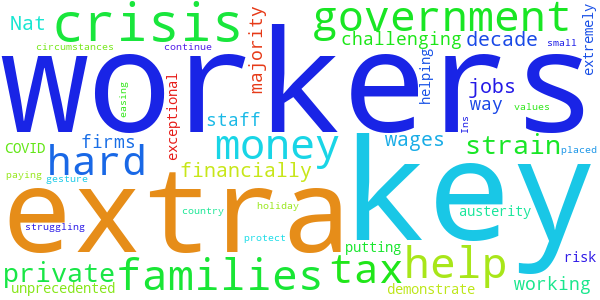 Give all key workers a 100% tax and Nat. Ins. holiday through COVID-19 crisis

Give all key workers a 100% tax and Nat. Ins. holiday through COVID-19 crisis

The government is helping private firms to protect jobs by paying up to 80% of staff wages through this crisis. If it can do this why can it not help key workers who will be putting themselves/their families at risk and working extra hard under extremely challenging and unprecedented circumstances.

The majority of key workers are struggling financially after a decade of austerity and this small gesture will demonstrate how the government and the country as a whole values what they do for us all. The extra money will also go some way to easing the exceptional strain that is being and will continue to be placed on these key workers and their families.

The Government responded to this petition on Monday 27th April 2020

The Government has announced an unprecedented package of measures to support public services and workers through Coronavirus, targeting support where it’s needed most.

The Coronavirus is the biggest threat the UK has faced in decades. Key workers have already demonstrated remarkable commitment to keeping the public safe in the continuing fight against the virus. The Government hugely values and appreciates these vital contributions to the COVID-19 response, both in the private and public sector.

Key workers deserve to be properly rewarded for the work they do. The Government has agreed specific pay and pension packages for a number of public sector workforces, including in the NHS, both to increase system capacity and recognise their work. More than one million NHS workers continue to benefit from the three-year Agenda for Change pay deal. The reforms will see the starting salary for a newly qualified nurse rise to £24,907 in 2020/21, 12.6% higher than 2017/18.

In addition, the Government is supporting those at work through the package of measures it has announced to protect against the current economic emergency. This includes significant changes to the operation of statutory sick pay, universal credit, and employment and support allowance, so that people have quicker and more generous access to a support system. To support self-employed individuals affected by the coronavirus outbreak, the Government has also announced a new Self-Employed Income Support Scheme, alongside the deferral of income tax and VAT payments.

The Government is targeting support where it is most needed. A blanket tax holiday would be untargeted. Those paying higher rates of tax would receive the greatest benefit, while low-earning individuals with income below the personal allowance or the NICs primary threshold would not benefit. Furthermore, HMRC’s systems have not been designed to distinguish between key workers and non-key workers, and so the extension of this tax treatment to key workers would be vulnerable to exploitation and fraud by people who were not key workers and so not entitled to it.

The UK’s economic response to COVID-19 is one of the most generous and comprehensive in the world, and the Government is now working urgently to deliver these schemes as quickly as possible.

The Government is also closely monitoring the impact of measures, having regard to the need to support public services, businesses, and individuals, and will continue to keep all policies under review.