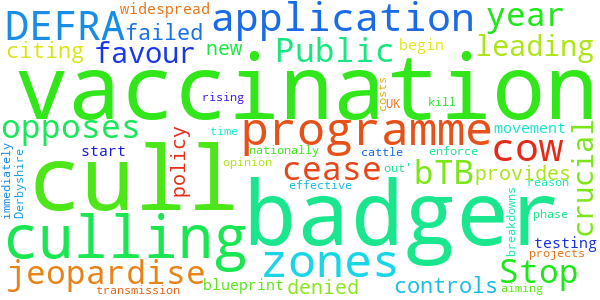 Published on Wednesday 6th May 2020

Public opinion opposes culling. It is time to cease badger culling in favour of vaccination. With applications for 18 new cull zones this year, and costs rising, this is not a 'phase out' of the failed badger cull policy. In 2019 there were 46 cull zones aiming to kill 64,000 badgers.

Most bTB breakdowns are due to cow-to-cow transmission. It is crucial that DEFRA enforce cattle movement controls and begin effective testing.
In 2019 an application to cull badgers in Derbyshire was denied, with DEFRA citing the leading vaccination programme as the reason. This programme provides a blueprint for vaccination projects nationally, but any UK culling will jeopardise vaccination programmes.

The Government responded to this petition on Tuesday 14th July 2020

The current intensive badger culling policy will be phased out in the next few years, to be gradually replaced by government-supported badger vaccination and surveillance.

Bovine TB (bTB) is one of the most difficult and intractable animal health challenges that England faces today. Around 30,000 cattle have to be slaughtered annually due to infection. Our cattle breeders suffer the loss of prize-winning animals and valued herds and this loss creates considerable trauma in the farming industry.

Our 25-year strategy to eradicate bTB in England is founded in science. It applies the lessons of our history in previous attempts to control the disease as well as evidence from other countries around the world and trial work conducted in the UK during the 1970s and, more recently, during the Randomised Badger Culling Trial conducted between 1998 and 2007.

The cornerstone of our strategy, as before, is a policy of regular testing and removal of infected cattle from herds. We have also incrementally introduced tougher restrictions on cattle movements from herds at risk of infection and more sensitive tests. We have introduced measures to encourage greater risk management and more information for the keepers of cattle. We have also deployed wildlife controls in areas where the disease is rife and we have deployed new biosecurity measures to try to break the cycle of infection between cattle and badgers.

Since the initial badger cull pilot in 2013, a policy of badger control has been rolled out in many parts of the High-Risk Area in the south-west and west of England. As of 2019, 57% of the High-Risk Area is now subject to a licensed cull of badgers. This policy, while difficult and inevitably contentious, is starting to yield results. Epidemiological analysis conducted by Downs and others has shown that the incidence of the disease in the first cull areas of Somerset and Gloucester has fallen substantially, by 37% and 66% respectively relative to comparison areas. However, the badger is an iconic, protected species and no one wants to be culling badgers forever. An intensive badger cull was only ever envisaged as a phase of the strategy, not a perpetual state of affairs.


The government will begin an exit strategy from the intensive culling of badgers, while ensuring that wildlife control remains a tool that can be deployed where the epidemiological evidence supports it. As soon as possible, we intend to pilot government-funded badger vaccination in at least one area where the four-year cull cycle has concluded, with simultaneous surveillance of disease. Our aim is to identify an exit strategy from culling in those areas that have completed the four years of intensive culling by deploying vaccination to the remaining badger population.

While the government must retain the ability to introduce new cull zones where the disease is rife, our aim will be to allow future badger culls only where the epidemiological evidence points to a significant reservoir of the disease in badgers. We envisage that any remaining areas would join the current cull programme in the next few years and that the badger cull phase of the strategy would then wind down by the mid to late 2020s, although we would need to retain the ability to cull in a targeted way where the epidemiological evidence requires it.

In the Edge Area, where some vaccination projects have been supported, our aim will be to ensure that badger culling is only authorised in areas where the epidemiological evidence points to a problem in badgers. We will continue to support badger vaccination projects in areas where the prevalence of disease is low. We will also investigate the potential for projects where adjacent vaccination and culling could complement each other in controlling disease. Changes to our guidance to Natural England on licensing badger control will be subject to consultation.

Finally, the government will invest in the deployment of better, more frequent and more diverse cattle testing so that we are able to detect the presence of the disease earlier and remove it from cattle herds faster. Next year, we intend to increase the frequency of mandatory surveillance testing from annual to six-monthly across the High-Risk Area. Improving the efficacy of our testing regime through better diagnostics is a key component of a successful strategy.

There is no single answer to tackling the scourge of bTB but by deploying a range of policy interventions, we can turn the tide on this terrible disease and achieve our long-term objective of eradicating it in England by 2038.