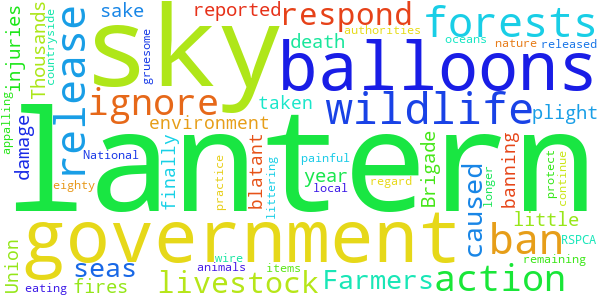 For the sake of wildlife & forests ban the release of balloons and sky lanterns.

For the sake of wildlife & forests ban the release of balloons and sky lanterns.

We call on the government to finally take action on this blatant littering of our countryside and oceans. Over eighty local authorities have already taken action to ban these items.
The RSPCA and the National Farmers Union have reported gruesome injuries and the painful death of animals, with livestock and wildlife eating lantern wire. The Fire Brigade has also had to respond to fires caused by sky lanterns.
The government cannot and must not continue to ignore this appalling practice.

The Government responded to this petition on Monday 5th October 2020

The Government takes its responsibility of safeguarding the environment seriously. Based on evidence available, we have concluded that an outright ban would be disproportionate in the circumstances.

The Government recognises concerns that sky lanterns and balloons can pose a threat to the environment and wildlife. For this reason, Defra and the Welsh Government commissioned an independent study in 2013 into the impacts of sky lanterns and helium balloons on the health and welfare of livestock. The report concluded that these impacts were relatively minor. Any action the Government takes must be proportionate to the level of risk and we have concluded that an outright ban would be disproportionate in the circumstances.

Although there is no legislation that specifically regulates the release of balloons or sky lanterns, voluntary actions and initiatives aimed at minimising the risks associated with sky lanterns and driving up safety standards have been effective. Initiatives include publication of a Trading Standards Institute voluntary code of practice for sky lanterns to ensure that they are manufactured to be safe and sold responsibly. Sky lanterns also fall in scope of the General Product Safety Regulations 2005 which oblige producers and distributors to place only safe consumer products on the market. These regulations are enforced by local authority Trading Standards services across the UK.

We have also provided local authorities with powers to restrict or ban the use of sky lanterns on council or public land and, as the petition notes, many local authorities have already put such measures in place.

As the law stands in England, it is conceivable that a magistrates’ court would conclude that a release of balloons or sky lanterns constitutes a littering offence. Section 87 of the Environmental Protection Act 1990 says: “A person is guilty of an offence if he throws down, drops or otherwise deposits any litter in any place to which this section applies and leaves it”. Ultimately it would be for a court to rule whether this phrase would cover balloon or sky lantern releases.

Councils in England have the necessary powers to take an individual whom they believe to be guilty of a littering offence to court or, as an alternative, issue a fixed penalty notice. Where a case does go to court, the magistrate will determine whether a particular incident constitutes a littering offence and, if so, the appropriate fine. It would be up to the council to decide whether bringing a prosecution for releasing balloons or sky lanterns was appropriate and a good use of its funds.

The Government considers the current voluntary and regulatory regime, supported by existing guidance on the safe manufacture and use of sky lanterns, is effective and proportionate.