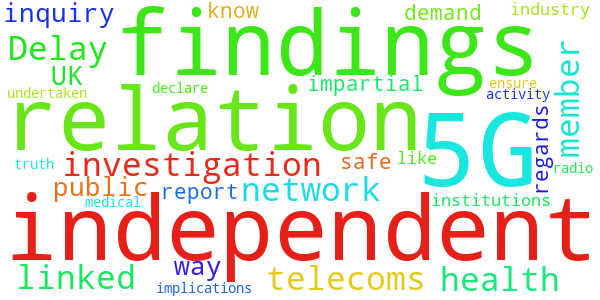 I would like to see a full independent investigation and report to declare the findings on the 5G network in relation to radio activity and the health implications.

The inquiry should be undertaken by independent medical institutions that are not linked in any way to the telecoms industry, to ensure they are impartial to the findings of health in relation to 5G.

As a member of the public, I demand to know the truth in regards how safe 5G is.

The Government responded to this petition on Thursday 11th June 2020

In relation to 5G, PHE has said that the exposure to radio waves is expected to remain low relative to international guidelines and, as such, there should be no consequences for public health.

Central to PHE advice is that exposure to radio waves should comply with the guidelines published by the International Commission on Non-Ionizing Radiation Protection (ICNIRP). In compliance with PHE advice, mobile network operators have committed to follow the ICNIRP guidelines.  Therefore we have no plans to hold an investigation.

ICNIRP is an independent organisation which is formally recognised by the World Health Organization. It issues guidelines on human exposure to EMF, based upon the consensus view of a large amount of research carried out over many years. This includes the frequencies used by 5G and all other mobile / wireless technologies.

ICNIRP guidelines apply up to 300 GHz, well beyond the maximum (a few tens of GHz) frequencies under discussion for 5G.

“It is possible that there may be a small increase in overall exposure to radio waves when 5G is added to an existing network or in a new area. However, the overall exposure is expected to remain low relative to the guidelines and, as such, there should be no consequences for public health.”

The maximum measured at any mobile site was approximately 1.5% of those levels –
including signals from other mobile technologies such as 3G and 4G. The highest level from
5G signals specifically was 0.039% of the maximum set out in the guidelines.

A summary of PHE advice on 5G can be accessed in the following links:

ICNIRP’s guidance on 5G can be found here:
https://www.icnirp.org/en/applications/5g/5g.html