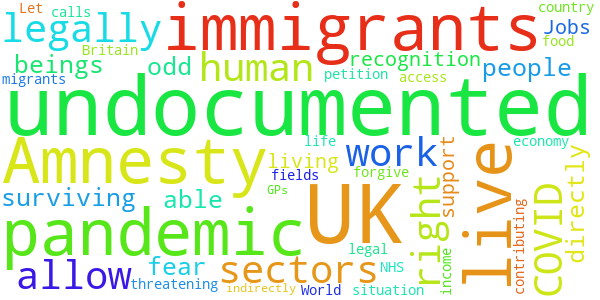 Amnesty for UK undocumented immigrants in this COVID-19 World pandemic

Amnesty for UK undocumented immigrants in this COVID-19 World pandemic

This petition calls for amnesty for undocumented immigrants living in UK during the COVID-19 pandemic, many of whom are surviving with life threatening fear, and may have no income, recognition, access to food or GPs.

Many undocumented immigrants are directly or indirectly contributing to our economy, NHS, odd Jobs sectors many more fields in the UK. Amnesty will allow undocumented migrants the legal right to live & work in the UK.

Undocumented immigrants are human beings, and if Britain allows these people to live legally in the UK, they will be able to work and legally support all sectors during the pandemic situation in the country. Let’s forgive them being undocumented.

The Government responded to this petition on Tuesday 30th June 2020

The Immigration Rules already enable the status of undocumented migrants (in the UK for some time and otherwise compliant with the law) to be regularised in some circumstances.

The Government remains committed to an immigration policy which welcomes and celebrates people here legally but deters illegal immigration as to do otherwise would be unfair on the vast majority who comply with all processes, and would encourage further illegal immigration, which can be dangerous for all involved. We must prevent the abuse of benefits and services, remove immigration offenders and foreign national offenders from the UK and disrupt the organised crime groups that prey on the vulnerable. The UK also has a proud history of providing protection to those who need it, in accordance with our international obligations under the Refugee Convention and European Convention on Human Rights (ECHR).

The Immigration Rules already enable the status of undocumented migrants (in the UK for some time, and otherwise compliant with the law) to be regularised in some circumstances.

Migrants may make an application for leave to remain where there are grounds to do so. This will remain the case when the new points-based immigration system is implemented.

The current private life Immigration Rules provide a route for people to remain in the UK in certain circumstances. This includes:

A child (under 18 years), who has lived continuously in the UK for seven years where it would not be reasonable for them to leave.

Furthermore, families can regularise their status under the family Immigration Rules where there is a qualifying partner or child (who is British or who has lived continuously in the UK for at least seven years) and it is unreasonable to expect family life to continue outside the UK or for the child to leave.

In addition to the immigration routes highlighted above, if appropriate in light of the situation in their country of origin, undocumented migrants may claim asylum. The UK will continue to uphold our obligations under the Refugee Convention, and the ECHR, during this time. Therefore, in relation to asylum claims, whilst ensuring that the Home Office is adhering to Public Health England’s advice in relation to the COVID-19 outbreak, claims can still be made, and decisions are continuing to be served on a case by case basis where there is sufficient evidence for us to make an accurate and well-informed decision in-line with published policy. Even if an asylum claim is refused, measures we have implemented guarantee that an individual can remain safely accommodated and able to follow public health guidance, whilst maintaining access to financial support and healthcare until the end of June, and this will be kept under review.

For those who do not meet the requirements of the Immigration Rules, there is provision for a grant of leave where there are exceptional circumstances or compelling compassionate grounds which would mean refusal would result in unjustifiably harsh consequences for the applicant. Each application is considered on its merits, taking into account individual circumstances. This reflects our obligations under the European Convention on Human Rights.

More information on the various immigration routes available to migrants in the UK can be found here: https://www.gov.uk/government/organisations/uk-visas-and-immigration.

Should an undocumented migrant fail to meet the requirements of the various immigration routes available, and have no right to remain, then they should leave the UK. There is assistance available to help such individuals leave the UK, such as the Voluntary Returns Scheme. Allowing undocumented migrants to remain would result in an inability to have immigration control.

As a result of this, there are no plans for the Government to create a new amnesty route as requested by this petition.