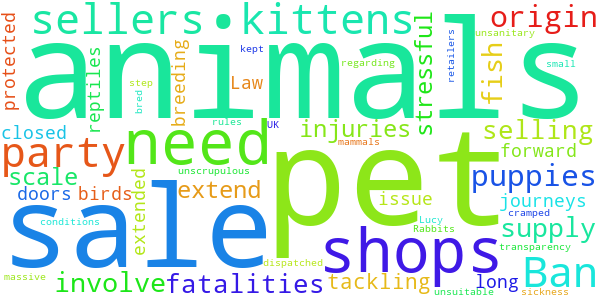 Lucy’s Law is a step forward in tackling the issue of unscrupulous breeding and selling of puppies and kittens, but there is a need to extend these rules to other animals. Rabbits, small mammals, reptiles, fish and birds need to be protected too.

Many animals are bred on a massive scale to supply pet shops and other sellers. These animals are often kept in cramped, unsanitary, and unsuitable conditions, behind closed doors. They are dispatched to retailers across the UK, which can involve long stressful journeys as well as sickness, injuries, and fatalities, and there is no transparency regarding the origin of pets for sale in shops. The ban on the third party-sale of puppies and kittens should therefore be extended to all animals.

The Government responded to this petition on Thursday 31st December 2020

Current legislation, regulations and official guidance require pet shops and other sellers to care properly for all their animals and we are not currently considering extending Lucy’s Law.

Animal welfare is a priority for this government and Defra takes the issue of unscrupulous pet breeders and sellers very seriously.

Under the Animal Welfare Act 2006 (the 2006 Act), pet sellers who do not meet their animals’ needs, or who cause their animals distress and suffering, are liable to criminal prosecution. The 2006 Act requires that animals are provided with a suitable environment and diet; are able to exhibit normal behavioural patterns; have their housing needs met; and are protected from pain, suffering, injury and disease. Anyone who commits an offence under the 2006 Act may be banned from owning animals, face an unlimited fine and be sent to prison for up six months. The Government is supporting legislation currently before Parliament – the Animal Welfare (Sentencing) Bill – which when passed will increase the maximum penalty for animal cruelty to five years’ imprisonment. This will provide one of the toughest sanctions in Europe, strengthening the UK’s position as a global leader on animal welfare.

In addition, sales activity by pet shops and other sellers is specifically regulated by the Animal Welfare (Licensing of Activities Involving Animals) (England) Regulations 2018 (LAIA Regulations). These require all licensed pet sellers, including wholesalers, to abide by strict statutory minimum welfare standards. Upon introduction in 2018 the LAIA Regulations were widely welcomed by animal welfare organisations and veterinary groups.

The LAIA Regulations protect animals which are being offered for sale from poor welfare standards and unsuitable conditions. They place a duty on the pet seller to provide the purchaser with information on how to care for their new pet properly. The LAIA Regulations are supported by official guidance notes providing further detail. Licensed pet sellers must keep animals in an environment suitable for their species and condition, taking into account the behavioural needs of the animal. Licensed sellers must ensure appropriate levels of noise, light and ventilation, and must ensure that animals are kept cleanly and comfortably. Pet sellers must also make reasonable efforts to ensure that all animals, either received or sold, are transported in a suitable manner. With regards to transparency around the origin of animals sold by pet sellers, the LAIA Regulations require licence holders to inform purchasers of the country of origin of the animal, and any advertisement for the sale of an animal must also state its country of origin.

It is the responsibility of Local Authorities to use their powers of inspection and licensing to implement the LAIA Regulations and ensure that the minimum standards are applied properly. If a pet shop or other seller does not provide these minimum welfare standards, as assessed by their Local Authority following inspection, then they may lose their licence and no longer be permitted to sell the animals. The licensing scheme includes a star rating to incentivise pet sellers to exceed the minimum standards.

In addition to these widespread protections and requirements for all pets, the Government has introduced strengthened measures specifically targeted at sales of puppies and kittens given the particular risks which apply here. We banned the commercial third-party sales of puppies and kittens, and we launched the Petfished campaign which shows prospective dog and cat owners how to spot unscrupulous sellers.

The Secretary of State is required to carry out a review of the regulatory provisions contained in the LAIA Regulations and publish a report setting out the conclusions of the review – this is planned for completion in 2023. As part of planning for this evaluation, we are proactively working with partners including the Companion Animal Sector Council through which interested parties may feed in their views. At this stage we do not consider that the case has been made to require that people can only be licensed to sell any pet if they themselves have bred it. For example, this may generate unintended effects if a particular seller cannot sell all of the animals they have bred. The overall impact on pet shops, on other sellers and on breeders would also need to be considered carefully.

In addition, other aspects of Lucy’s Law are more relevant to puppies and kittens, due to their specific behavioural requirements, than they are to other animals such as fish, reptiles and birds. Such behavioural requirements include the need for puppies and kittens to be kept with their mother, and for suitable socialisation which is essential for their development.