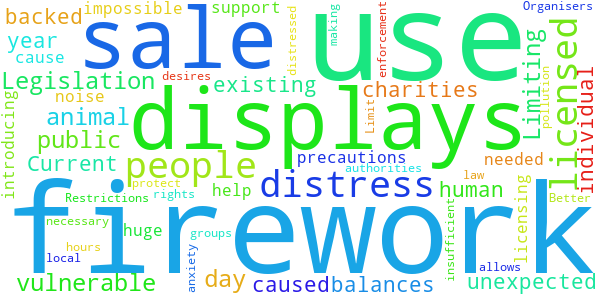 Submitted by Julie Doorne on Friday 8th May 2020

Current legislation allows for public use of fireworks 16 hours a day, every day, making it impossible for vulnerable groups to take precautions against the distress they can cause. Better enforcement of existing law is insufficient; limiting their sale & use to licensed displays only is necessary.

Restrictions on the sale & use of fireworks has huge public support and is backed by several human and animal charities. Limiting the sale & use of fireworks to displays only, by introducing licensing via local authorities, would help to protect vulnerable people and animals from the distress and anxiety caused by unexpected firework noise & pollution. Legislation that balances people’s desires for firework displays, and individual rights to not be distressed throughout the year, is needed now.

The Government responded to this petition on Thursday 13th August 2020

The Petitions Committee inquiry in 2019 concluded that it would not be appropriate for the Government to ban the public use of fireworks.

Last year, the Petitions Committee carried out an extensive inquiry into fireworks, which ran from February to November 2019. The Committee asked for evidence on the balance and effectiveness of existing legislation, the role and safety of public and private displays, and the needs of particular groups (such as veterans and people with disabilities), and animals. They received written and oral evidence representing a range of stakeholders, including from members of the public, representative bodies, organisations and charities, all with varying views on fireworks.

The Committee’s final report, published on 5 November 2019, concluded that they could not support a ban on the public buying and using fireworks. Their reasoning for no further legislative action was:

The likely effects on community groups and their local fundraising efforts;

The concerns about ineffectiveness of a ban and resulting unintended and counter-productive consequences for public safety;

The substantial economic effect a ban would have, in particular, on those who have built their livelihoods on the fireworks industry.

We agree with the conclusion of the Petitions Committee. In the Government’s response to the Committee, we also agreed that a ban could have the unintended consequence of pushing the market underground, driving individuals to source fireworks from illegitimate or unsafe suppliers. A ban could also prove detrimental to communities for cultural or financial reasons.

Nevertheless, the Government has committed to take further action to promote the safe and considerate use of fireworks and our actions will include:

Developing a public awareness campaign on the safe use of fireworks;

Engaging with Local Authorities to understand the issues they face with regard to fireworks;

Engaging with the fireworks industry to discuss any additional action they might take to address the concerns raised around fireworks packaging appealing to underage individuals.

These actions show that the Government has been listening to the concerns that have been raised about fireworks and that work is continuing.