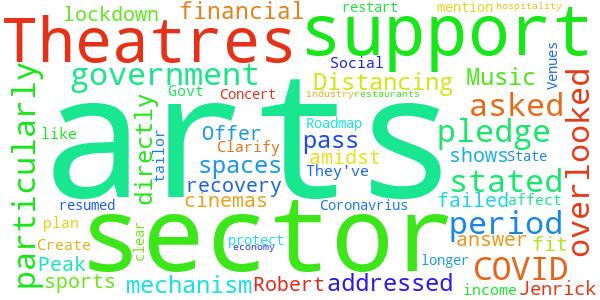 Submitted by Miles Croxford on Wednesday 13th May 2020

As we pass the COVID-19 Peak, the Government should: State where the Theatres and Arts fit in the Coronavrius recovery Roadmap, Create a tailor made financial support mechanism for the Arts sector & Clarify how Social Distancing will affect arts spaces like Theatres and Concert Venues.

In their plan to restart the economy, the government has addressed hospitality sectors such as restaurants and cinemas. They've stated how the sports will be resumed after the lockdown period. But there has been no mention of the arts. On 13 May Robert Jenrick was directly asked to pledge to protect this industry, which could be without income longer than other sectors, but he failed to give a clear answer. This further shows how the arts are being overlooked. The Govt must show more support for arts.

The Government responded to this petition on Monday 20th July 2020

HMG announced a £1.57 billion package for cultural organisations. From 11/7 outdoor performances are allowed. From 1/8, indoor performances to live audiences can restart, subject to success of pilots.

The Government recognises the huge contribution the arts and cultural sector makes, not only to the economy and international reputation of the United Kingdom, but also to the wellbeing and enrichment of its people.

We appreciate that this is an incredibly challenging time and that there are many cultural organisations and professionals who are currently facing difficult and uncertain circumstances. We are very alert to this issue, and are working to find solutions that support this vital sector as the lockdown eases.

On 5 July, the government announced a major £1.57 billion support package for cultural organisations to help them through the coronavirus pandemic. Culture and Heritage are at the heart of communities across the country, enriching the lives of millions, and this financial investment is testament to the role this sector plays in our lives.

This funding will prioritise institutions of national and international significance and those that are crucial to the valuable cultural fabric to places and communities and down the country. In order to receive support, organisations will need to demonstrate that they are at risk in this financial year and have done all they can to exhaust other options.This fund will support organisations through to the Spring of 2021.

Key organisations in England will be able to apply for grants or loans, with loans being offered on generous terms, with low rates, an up-front repayment holiday, and long payback period.
Grant funding will be delivered through Arts Council England, Historic England, National Lottery Heritage Fund, and the British Film Institute to support cultural and heritage organisations at risk, including publicly-funded and non-publicly-funded arts, museums and heritage organisations, music venues and independent cinemas. Details of guidance and application phases will be set out by Arms Length Bodies in due course. Further information can be found here: https://www.gov.uk/government/news/157-billion-investment-to-protect-britains-world-class-cultural-arts-and-heritage-institutions.


In addition, the Secretary of State for the Department for Digital, Culture, Media and Sport recently revealed a five stage roadmap that the government will work through to get the performing arts sectors back up and running as soon as possible:

Stage One - Rehearsal and training (no audiences)

From the 11th July, we will move to Stage Three. This means that performances outdoors with a socially distanced audience can take place in line with this guidance. The Department for Digital, Culture, Media and Sport is working alongside sector bodies including UK Theatre, the Association of British Orchestras, the Musicians’ Union, One Dance UK, the Music Venue Trust and Live Comedy Association to identify suitable pilots for indoor performances with a socially distanced audience. From 1 August, indoor performances to a live audience can restart, subject to the success of pilots.

On 9th July we published guidance for people who work in performing arts, including arts organisations, venue operators and participants which will help people understand how they can work and take part in the performing arts safely, and keep their audiences safe. It provides advice on all aspects of performance, from casting, sound and lighting, costume and fitting, to cloakrooms, orchestra pits, hair and make-up.

This petition was debated in Parliament on Thursday 25th June 2020