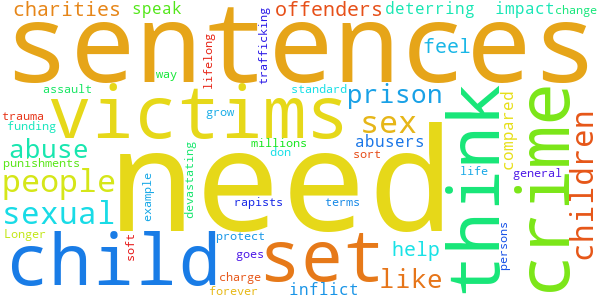 Submitted by Faryn khan on Thursday 28th May 2020

Sexual assault can have a devastating impact on children as they grow up and victims in general. This crime can change a persons life forever. I think the prison sentences and punishments for crimes like these as too soft and more needs to be done in terms of deterring this sort of crime.

We need to set an example. Child trafficking and child abuse goes on more than we think and we need to do more. The prison sentences abusers get is nothing compared to the lifelong trauma they inflict on their victims. I would like more funding to go to charities that help the victims of sexual abuse however I don’t think it’s enough. We need to set a standard. We need to protect our children and ourselves. The people in charge need speak for the millions of people who feel this way.

The Government responded to this petition on Monday 21st September 2020

Nothing is more important than the safety of children. Reforms announced in the Sentencing White Paper will ensure offenders who commit serious sexual assaults against children spend longer in prison.

Sentencing in individual cases is entirely a matter for our independent courts based on the circumstances of the offence and the offender. The Sexual Offences Act 2003 has a clear, comprehensive framework of offences to deal with the scourge of sexual abuse and exploitation, and rightly carries robust sentences to deal with serious offending.

The 2003 Act was designed to meet the 21st Century challenges of protecting children, and addresses issues including internet pornography, sexual activity with vulnerable adults, and grooming children for sexual abuse. It provides robust penalties to reflect the seriousness of this offending and the harm it causes to victims, including up to life imprisonment for some offences.

In April the government ended the automatic release at the half-way point in their custodial term for serious offenders sentenced to 7 or more years for certain crimes, such as rape, where the maximum penalty is life. Instead they will be made to spend two-thirds of their sentence in prison, before being subject to strict licence conditions upon release. We propose to go further, with measures announced in the Sentencing White Paper, to extend this approach to certain serious offenders sentenced to 4 years or more – as well as other reforms to ensure serious sexual offenders spend longer in prison.

The government is committed to stamping out all forms of sexual abuse and continuing to be a global leader in tackling child sexual exploitation and abuse (CSEA). In recent years we have made a significant investment in tackling all forms of CSEA and the step change in our response is already drawing this hidden crime out of the shadows. Last year, the government announced an additional £30 million to safeguard children from CSEA. This includes £9.86 million to the National Crime Agency to improve its ability to tackle perpetrators seeking to offend against children via the Dark Web, as well as £3.36 million to further improve our understanding of child sexual abuse and tackle all aspects of the threat.

We recognise that child sexual abuse can have a devastating impact on many aspects of victims’ lives and are committed to ensuring that all victims and survivors, whether they are a child or an adult, can access the specialist support they need. We have significantly increased funding to both local and national charities which provide support to victims and survivors of child sexual abuse. More broadly, the Ministry of Justice provides over £134.5m in funding for victim support services across the country to ensure victims of crime receive the support they need when they need it, to help them cope and recover in the aftermath of crime.

However, we need to keep up with the fast-evolving threat. This is why the government has committed to publishing a first of its kind national strategy by the end of the year on tackling all forms of child sexual abuse which will outline our long-term ambition to drive a whole-system response to this heinous crime.