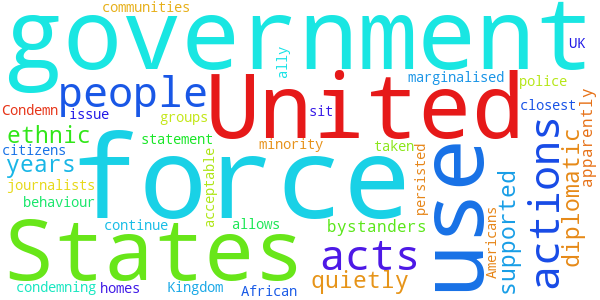 Submitted by A Robinson on Monday 1st June 2020

The Government of the United Kingdom should issue a statement condemning the actions of the United States government for acts of force against their own people and that if these acts continue diplomatic actions should be taken.

The Government responded to this petition on Friday 26th June 2020

The UK Government has already been clear the violence we saw in the US was very alarming, and we have raised our concerns with the US Government.

Following the death of George Floyd in police custody on 25 May 2020 and the protests that followed, the Prime Minister and the Foreign Secretary spoke publicly to state that Mr Floyd’s death was appalling, inexcusable and deeply distressing. They expressed the UK Government’s concern at the violence that followed, and underlined people’s right to protest peacefully, including at Prime Minister’s Questions on 3 June and during the Foreign Secretary’s media interviews.

The UK Government believes that all citizens are equal before the law and that principle is as important to Americans as it is to us here in Britain. The right to peaceful protest is an essential part of any free society.

The British Embassy in Washington has raised the issue of the protests with the US Administration and explained the depth of feeling felt in the UK around the death of Mr Floyd.

However, it’s important not to lose sight of the fact that the US remains a beacon for freedom, opportunity, democracy and openness. Every democracy faces challenges; the key is how they are dealt with. The US has robust and extensive rule of law institutions and processes and there is democratic oversight, accountability and extensive public scrutiny, including by an active civil society and media. This will continue to be the case.

The protests we have seen are a stark reminder that, despite decades of progress, we must do more to tackle racial inequality.

This is a global challenge, and now is the time to listen and learn from those communities that face discrimination, and work together to put an end to this injustice.