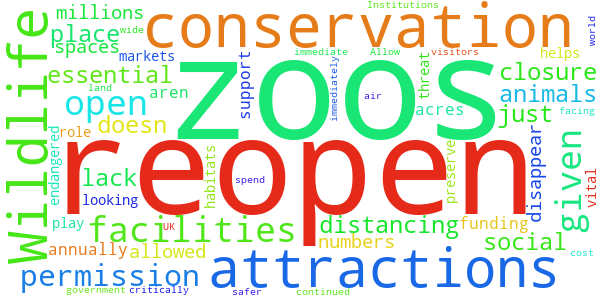 Zoos play a vital role in conservation, not only in the UK, but also around the world. Institutions spend millions annually funding conservation that helps to preserve the habitats and numbers of critically endangered animals.

This conservation has been put under threat by the continued closure of zoos, with many facing closure due to the lack of government support.

The cost of looking after animals doesn’t just disappear when visitors aren’t around and it is essential they be allowed to reopen immediately.

The Government responded to this petition on Friday 26th June 2020

Outdoor areas of zoos and safari parks were allowed to reopen on 15 June, subject to social distancing measures being in place. The reopening of indoor parts of zoos is being kept under review.

The Government recognises that organisations such as zoos, aquariums and animal welfare charities are working tirelessly during this challenging time to safeguard the health and welfare needs of animals in their care. The Government also recognises that many of these organisations in the UK, as well as providing high welfare standards for their animals, contribute significantly to both conservation work and education, helping both sustain endangered species but also teaching people about animals’ natural habitats - as well as how at risk that species may be.

As announced by the Prime Minister on 10 June, outdoor animal attractions, including safari parks, the outdoor parts of zoos and animal attractions on farms, are now able to reopen, following strict social distancing guidelines. This includes keeping indoor exhibitions, such as reptile houses and those in aquariums, closed, and ensuring other amenities like cafes offer take-away services only.

The move follows close work by the Government with the zoo industry to ensure visitor numbers can be managed and safeguards are put in place. Allowing zoos to reopen is an integral step towards supporting an early financial recovery.

The decision to relax restrictions on these select outdoor attractions is part of the Government’s careful approach to easing the lockdown in phases, guided by the advice of scientific and medical experts and the fact the risk of transmission is much lower outdoors.

A number of schemes have been made available to businesses and charities to help them during this emergency. Organisations are eligible to apply for a range of support schemes including the Job Retention Scheme, VAT deferral, Business Rates Relief, the Business Interruption Loan schemes, the option to reclaim the costs of Statutory Sick Pay and grant funding of up to £25,000.

The Government launched a Zoos Support Fund on 4 May worth £14m in direct response to the concerns raised by zoos and aquariums as a result of the coronavirus pandemic. Licensed zoos or aquariums in England that are experiencing severe financial difficulties because of lost revenue can apply for a grant of up to £100,000. The fund is intended to help zoos at immediate risk to protect the welfare of animals living on site or by rehoming.

We are aware of the concerns raised by larger zoos. Defra continues to engage with the British and Irish Association of Zoos and Aquariums (BIAZA) and Her Majesty’s Treasury (HMT) to monitor how zoos are doing. Officials continue to meet regularly with some of the major zoos and aquariums in England to identify the impacts of the coronavirus pandemic on larger organisations. This includes monitoring concerns around potential implications for animal welfare. Consideration of proposals for any longer-term support that might be needed for the sector is ongoing. With the help and support of the industry, Defra is working diligently to find the best way forward.

The importance of allowing zoos to reopen was also debated in the House of Commons on 11 June in the adjournment debate on the reopening of zoos, aquariums and wildlife sanctuaries. The details of this debate can be seen in official records at https://hansard.parliament.uk/commons/2020-06-11/debates/CA7F5187-2AD7-4121-89B1-C8CC188FFE78/ZoosAquariumsAndWildlifeSanctuariesReopening