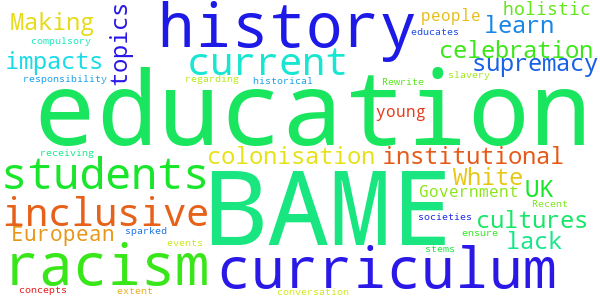 Rewrite the education curriculum to be more inclusive of BAME history - making topics on the historical and current impacts of European colonisation, institutional racism and slavery on BAME societies compulsory for all UK students to learn. As well, as celebration of BAME history and cultures.

Recent events in the US has sparked conversation amongst young people regarding the extent the current curriculum educates students on concepts such as institutional racism, White supremacy and celebration of BAME history and cultures.
Racism stems from a lack of education and it is the responsibility of the Government to ensure that the students are receiving a holistic education from the top-down.

The flexibility within the history curriculum means that there is the opportunity for teachers to teach about BAME history across a spectrum of themes and eras.

The flexibility within the history curriculum means that there is the opportunity for teachers to teach about Black, Asian and minority ethnic history across the spectrum of themes and eras set out in the curriculum.

We have set out some examples below that the Department suggests in the curriculum, but the teaching of Black, Asian and minority ethnic history need not be limited to these examples:

In Key Stage 1 – key historical events within or beyond living memory; the lives of key Black historical figures such as Mary Seacole and Rosa Parks or others.

In Key Stage 2 – the achievements of the earliest civilizations – an overview of where and when the first civilizations appeared and a depth study of one of the following: Ancient Sumer, The Indus Valley, Ancient Egypt, The Shang Dynasty of Ancient China; and a study of a non-European society that provides contrasts with British history, we give as choices an early Islamic civilization, including a study of Baghdad c. AD 900; Mayan civilization c. AD 900; and Benin (West Africa) c. AD 900-1300.

In Key Stage 3 – this key stage requires teaching of the theme “ideas, political power, industry and empire: Britain, 1745-1901”, within which we give examples including, Britain’s transatlantic slave trade: its effects and its eventual abolition, the development of the British Empire with a depth study (for example, of India), Ireland and Home Rule; and within the requirement to teach “the study of an aspect or theme in British history that consolidates and extends pupils’ chronological knowledge from before 1066” we give an example for a more in-depth study on the topic of the impact through time of the migration of people to, from and within the British Isles. This key stage also requires teaching of at least one study of a significant society or issue in world history and its interconnections with other world developments, we give examples of Mughal India 1526-1857, China’s Qing dynasty 1644-1911, Changing Russian empires c.1800-1989, USA in the 20th century.

Additionally, local history is an element across all key stages.

There is scope to include Black and minority ethnic history and experience in other curriculums as set out below:

Citizenship: At Key Stage 4, pupils should be taught about the diverse national, regional, religious and ethnic identities in the United Kingdom and the need for mutual respect and understanding. They are also taught about human rights and the actions citizens can take in democratic and electoral processes to influence decisions locally, nationally and beyond. Pupils should experience and evaluate different ways that citizens can act together to solve problems and contribute to society.

English: The national curriculum for English aims to ensure that all pupils appreciate our rich and varied literary heritage. It encourages pupils to read a range of books, poems and plays to encourage the development of life-long love of literature.

Pupils should be taught to maintain positive attitudes to reading and understanding of what they read by increasing their familiarity with a wide range of books, including myths, legends and traditional stories, modern fiction, fiction from our literary heritage, and books from other cultures and traditions.

Teachers have flexibility in their choice of books to teach within the context of the curriculum.

PSHE: Schools have flexibility to teach topics such as Black history as part of their Personal, Social, Health and Economic education (PSHE) programme and through the introduction of Relationships Education, Relationships and Sex Education and Health Education pupils will be taught the importance of respectful relationships in particular how stereotypes, based on sex, gender, race, religion, sexual orientation or disability, can cause damage.

All schools are required to teach a balanced and broadly based curriculum that promotes the spiritual, moral, cultural, mental and physical development of pupils, and prepares them for the opportunities, responsibilities and experiences of later life.

As set out in the examples above, the National Curriculum for England already has the flexibility to be inclusive of BAME history so we do not believe it is necessary to change the curriculum.

This is a revised response. The Petitions Committee requested a response which more directly addressed the request of the petition. You can find the original response towards the bottom of the petition page (https://petition.parliament.uk/petitions/323961)