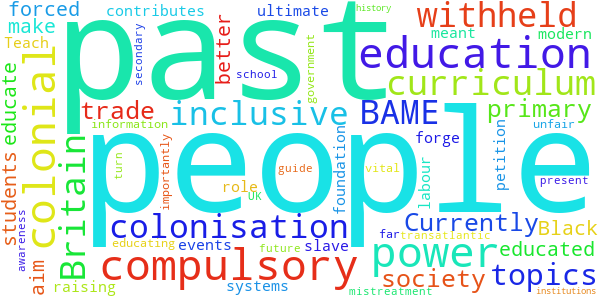 Teach Britain's colonial past as part of the UK's compulsory curriculum

Teach Britain's colonial past as part of the UK's compulsory curriculum

Currently, it is not compulsory for primary or secondary school students to be educated on Britain's role in colonisation, or the transatlantic slave trade. We petition the government to make education on topics such as these compulsory, with the ultimate aim of a far more inclusive curriculum.

Now, more than ever, we must turn to education and history to guide us. But vital information has been withheld from the people by institutions meant to educate them. By educating on the events of the past, we can forge a better future. Colonial powers must own up to their pasts by raising awareness of the forced labour of Black people, past and present mistreatment of BAME people, and most importantly, how this contributes to the unfair systems of power at the foundation of our modern society.

Within the history curriculum there is already a statutory theme at Key Stage 3 titled “ideas, political power, industry and empire: Britain, 1745-1901”, as such we do not believe there is a need to take this action as the option to teach this topic exists within this compulsory theme. The history curriculum gives teachers and schools the freedom and flexibility to use specific examples from history to teach pupils about the history of Britain and the wider world at all stages. It is for schools and teachers themselves to determine which examples, topics and resources to use to stimulate and challenge pupils and reflect key points in history.

There are opportunities within the themes and eras of the history curriculum for teachers and schools to teach about Britain's role in colonisation and the transatlantic slave trade.

We have drawn out below both statutory and non-statutory examples of themes in the curriculum where these topics could be taught.

Key Stage 1: Events within or beyond living memory that are significant nationally or globally; and the lives of significant individuals in the past who have contributed to national and international achievements.

Key Stage 2: A study of an aspect or theme in British history that extends pupils’ chronological knowledge beyond 1066.

Key Stage 3: Within the theme ‘the development of Church, state and society in Medieval Britain 1066-1509’, examples given include the Norman Conquest, and the English campaigns to conquer Wales and Scotland up to 1314;

Within the theme ‘the development of Church, state and society in Britain 1509-1745’, examples given include the first colony in America and first contact with India;

Within the theme ‘ideas, political power, industry and empire: Britain 1745-1901’, examples given include Britain’s transatlantic slave trade, including its effects and its eventual abolition, the development of the British Empire with a depth study (for example, of India), and Ireland and Home Rule;

Within the theme ‘challenges for Britain, Europe and the wider world 1901 to the present day’, examples include the two world wars, Indian independence and end of Empire, social, cultural and technological change in post-war British society, and Britain’s place in the world since 1945;

Within ‘the study of an aspect or theme in British history that consolidates and extends pupils’ chronological knowledge from before 1066’, examples include study of an aspect of social history, such as the impact through time of the migration of people to, from and within the British Isles; and at least one study of a significant society or issue in world history and its interconnections with other world developments. Examples given include Mughal India 1526-1857, China’s Qing dynasty 1644-1911, changing Russian empires c.1800-1989, and the United States in the 20th century.

In addition, the local history study element within each key stage offers opportunities to teach about these areas. They are also within the scope of the subject content set out for GCSE History.

This is a revised response. The Petitions Committee requested a response which more directly addressed the request of the petition. You can find the original response towards the bottom of the petition page (https://petition.parliament.uk/petitions/324092)