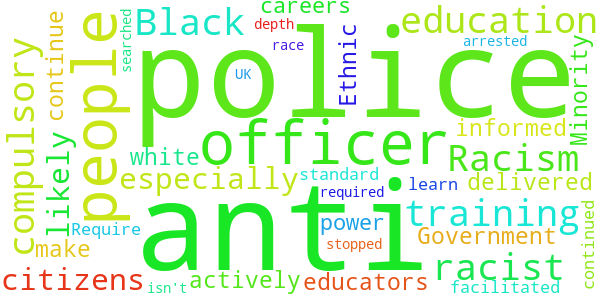 Black And Minority Ethnic people especially Black people are more likely to be stopped & searched, and arrested, than white people. To be anti-racist isn't enough. All UK citizens should be and continue to learn how to be actively anti-racist AND especially those in power such as police officers.

The Government should make in-depth anti-racism education (not standard D&I training) a compulsory part of the training required to become a police officer, and for continued training to be compulsory throughout the careers of police officers. This education should be delivered or facilitated/informed by black race educators.

The Government responded to this petition on Tuesday 8th September 2020

The Government condemns racism and racists. Racism, in any form, is abhorrent and has no place in our society. The Code of Ethics requires all police officers and staff to take active steps to oppose discrimination and make their decisions free from prejudice: this principle is at the heart of police practice.

No one should be targeted because of their race and stop and search should safeguard communities impacted by violence and crime.

The causes of racial disparities are complex, including reflecting broader structural inequalities this government has committed to tackling.

We collect more data on stop and search than ever before: the race of the person searched, what they were searched for, and how often objects were found, including force by force breakdowns. This data is published online, allowing local scrutiny groups, Police and Crime Commissioners and others to hold forces to account.

Her Majesty’s Inspectorate of Constabulary, Fire & Rescue Services (HMICFRS) look at force level stop and search data, including as part of its assessments. And statutory codes of practice and body worn video hold officers to account when they make a stop and search request.

In March 2019, the Home Office announced it was piloting a change to the way Section 60 'suspicionless' searches were carried out and as part of this asked the College of Policing to update their Authorised Professional Practice document to cover how police can best engage with communities on use of stop and search. This work is ongoing and is due to be published shortly.

The UK has a proud tradition of policing by consent based on trust between the police and the communities they serve. The public rightly expect police officers to meet high standards of professional conduct and the vast majority of officers in England and Wales uphold their oaths to act with impartiality and integrity, often in very challenging circumstances. But we know the impact it can have on individuals and their families when an officer commits a serious breach of these standards. Where there is discriminatory treatment, this can erode the trust of whole communities in policing, undermining the very consent which allows officers to fight crime and keep us safe.

A police service which is seen to tackle racism head-on, wherever it is found, is essential to building and maintaining the trust of all communities. This includes providing appropriate training for all officers and staff and ensuring the very highest professional standards are maintained throughout their careers.

The College of Policing, who set and maintain training standards for policing, published the Code of Ethics in 2014, which includes a set of principles for policing, including that all officers and staff should take active steps to oppose discrimination and make their decisions free from prejudice. This is a cornerstone of police training and development.

The College’s foundation training for all those entering the service includes substantial coverage of police ethics and self-understanding, including the effects of personal conscious and unconscious bias. Initial training covers hate crimes, ethics and equalities, and policing without bias.

Training for police investigators includes a specific focus on bias, policing fairly and the practical effects of these fundamentals on the investigation process.

Training for those involved in public protection area includes methods to raise trainees’ self-awareness of their own views, stereotypes and biases and refers specifically to hate crimes.

HMICFRS inspections regularly include an assessment of the training that officers and staff receive.

Alongside work on training and professional development, this Government has put in place more measures to ensure that policing is subject to appropriate levels of transparency and accountability – with regular inspections of the way forces engage with communities, frequent publication of data on use of police powers and strengthening the police complaints system.

In addition, we recognise that in order to build the trust of all communities, the police workforce must better reflect today’s modern, diverse society. The police officer workforce is more diverse in terms of ethnicity and gender than ever before, but there is still much more to be done. Our drive to recruit 20,000 officers over the next three years gives us a significant opportunity to attract a wide range people into a career in policing and support the police to achieve this aim.

We will continue to work closely with the College and all our policing partners to ensure that prejudice and discrimination of all kinds, including racism, are eliminated from policing.

This is a revised response. The Petitions Committee requested a response which more directly addressed the request of the petition. You can find the original response towards the bottom of the petition page (https://petition.parliament.uk/petitions/324879)