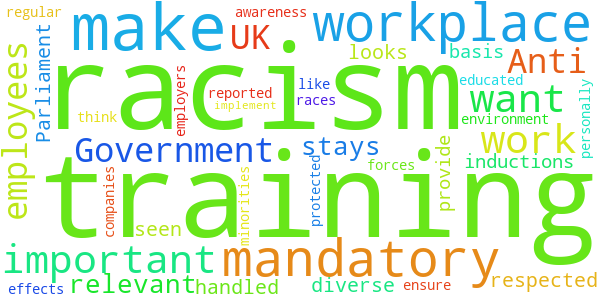 I want the government to make Anti-Racism training mandatory in all UK workplaces. To make companies implement this training into their inductions and to make employees take part in the training on a regular basis, to ensure that the training stays relevant.

I want the Government or Parliament to do this because I think it is important that employers and their employees are educated on what is racism, how it can be reported and handled, what racism looks like and to provide awareness of racism in the workplace. Work forces can be very diverse and it is important that all races are respected and protected while they work. I have personally seen racism within a workplace and the effects it has on the minorities within the environment.

The Government responded to this petition on Friday 7th August 2020

We are committed to tackling racism in the UK, and have recently established a new cross-government commission which will consider all options in the round and make recommendations for reform.

This Government has always said –as set out in our manifesto – that we will ensure Britain is a fairer society and we will tackle racial and ethnic inequalities wherever they exist.

Racism has no place in our communities, our workplaces or our lives. We have already established a Government Equality Hub, which includes the Race Disparity Unit to look specifically at race and ethnicity. We also launched the Race at Work Charter, giving businesses a clear set of actions to help create greater opportunities for ethnic minorities at work.

We know that there is still much progress to be made in this area, which is why we recently announced the establishment of a new cross-government commission to examine continuing racial and ethnic inequalities in Britain, and to set out concrete recommendations for further reform.
The commission will consider all aspects of inequality, including in employment and will champion the success of BAME groups. The aim is to set out a new, positive agenda for change – balancing the needs of individuals, communities and society. It will build on the work of the Race Disparity Unit, but will go further to understand why disparities exist, what works and what doesn’t, and present recommendations for action across Government and other public bodies.

Therefore, whilst at this stage we are not committing to introducing mandatory anti- racism training, we are taking important steps to assess what reforms will have the most significant and positive impacts on tackling racism and inequalities in the UK workplaces.

The Government recently announced membership and terms of reference for the Commission, details of which can be found at https://www.gov.uk/government/organisations/commission-on-race-and-ethnic-disparities

The Commission will aim to report its findings on the priority areas of health, education, criminal justice and employment by the end of this year.