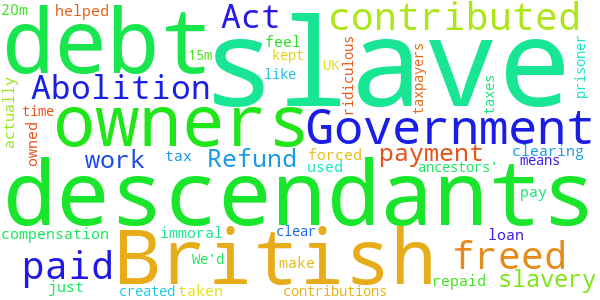 We'd like the Government to refund the tax contributions that helped to clear the Slavery Abolition Act debt up to 2015 to taxpayers who are descendants of slaves owned by British slave owners. We feel it's immoral for descendants of British slaves to have contributed towards clearing this debt.

The Government paid £20m compensation to owners of the freed slaves under the Act. Nothing was paid to the slaves themselves for their time being kept as a prisoner forced to work. To make compensation payment, a £15m loan was taken out which was not repaid until 2015.

This means descendants of slaves who work in the UK up to 2015 actually contributed to clearing the debt that was created because of a payment made to their ancestors' owners, just so that they could be freed. This is ridiculous.

The Government responded to this petition on Thursday 20th August 2020

The UK deplores the human suffering caused by slavery and the slave trade. These are among the most abhorrent chapters in the history of humanity.

The Government feels deep sorrow for the transatlantic slave trade, and it fully recognises the strong sense of public injustice about slavery. Refunding taxes is not practicable and would reduce the funding available for current public services.

Instead, the Government believes we must look to the future and focus on the shared global challenges, working to address the reality of modern slavery in the UK and around the world. It is vital to ensure that slavery has no place in today’s world and that future generations do not forget what happened in the past.

Accordingly, in addition to passing the Modern Slavery Act in 2015, the UK co-sponsored the UN resolution, initiated by Caribbean countries, to designate 25 March as an annual international day of Remembrance of the Victims of Slavery and the Trans-Atlantic Slave Trade.

On 14 June 2020, the Prime Minister pledged to establish a new Commission on Race and Ethnic Disparities. This cross-government commission will examine all aspects of continuing racial and ethnic inequalities in Britain. The Commission aims to set out a new, positive agenda for change; balancing the needs of individuals, communities and society, maximising opportunities and ensuring fairness for all. The Commission will report by the end of the year.