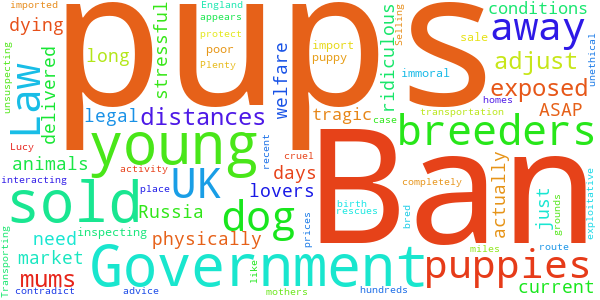 Ban the exploitative import of young puppies for sale in the UK.

Ban the exploitative import of young puppies for sale in the UK.

The recent tragic case of a puppy dying just 6 days after being delivered from Russia has exposed a completely legal but immoral route to market for pups bred hundreds of miles away & sold away from their mums. Who’s actually inspecting these breeders & transportation conditions? Selling imported pups like this is cruel & appears to contradict the Government’s own advice to always physically “see puppies interacting with their mothers in their place of birth” as with Lucy’s Law in England.

The Government responded to this petition on Tuesday 8th September 2020

The Government works to ensure regulations protecting the welfare of transported animals is followed while also educating potential pet buyers of the risks of buying from a deceitful seller.

The Government takes the issue surrounding the importation of pets very seriously and continues to ensure that the illegal import of puppies is stopped and that puppies brought into the UK through legal means receive a high standard of care.

Under article 4 of The Welfare of Animals (Transport) (England) Order 2006, there are some general provisions for the protection of all animals during transport. It is an offence to transport animals, including people transporting dogs, in a way that will cause injury or unnecessary suffering. Animals must be transported in a means of transport which takes in to consideration the conditions required for the animals such as space, ventilation, temperature, security, liquid and oxygen needs.

Our policy is to ensure, therefore, full application of existing EU rules on our territory during the Transition Period, and to encourage other member states to do the same. Unilaterally banning the import of puppies would amount to a restriction on trade which would need strong justification under World Trade Organisation rules and whilst we remain in the transition period, is not possible under EU trade law. Following the end of the Transition period we will explore options to combat the trade in young puppies which are consistent with World Trade Organisation rules.

The government also continues to raise awareness regarding the improper selling of pets by deceitful sellers through our ‘Petfished’ campaign which seeks to educate prospective pet buyers on common tricks and tactics used by deceitful sellers which may result in the purchase of a mistreated or unwell pet. The campaign urges buyers to mitigate risks, for example by buying from trusted sellers such as those under the Kennel Club’s Assured Breeder scheme, viewing puppies with their mothers and siblings, asking questions of the seller and following the Animal Welfare Foundation and RSPCA Puppy Contract to ensure that puppies are in good health when purchased.

This is a revised response. The Petitions Committee requested a response which more directly addressed the request of the petition. You can find the original response towards the bottom of the petition page (https://petition.parliament.uk/petitions/326261)