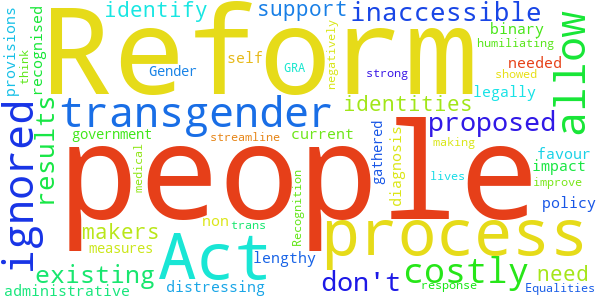 Reform the GRA to allow transgender people to self-identify without the need for a medical diagnosis, to streamline the administrative process, and to allow non-binary identities to be legally recognised.

The response gathered by the government showed strong support for this reform with 70% in favour, but the results seem to have been ignored by policy makers.

The current process is distressing and often humiliating for transgender people, as well as lengthy and costly making it inaccessible to many people. Reform is needed to improve the lives of trans people, and I don't think the proposed measures will negatively impact existing provisions under the Equalities Act.

The Government responded to this petition on Wednesday 7th October 2020

We want transgender people to be free to live and prosper in modern Britain. The Government looked carefully at the issues raised and believe that this legislation strikes the right balance.

We want transgender people to be free to live and to prosper in modern Britain. We have looked carefully at the issues raised in the consultation, including potential changes to the Gender Recognition Act 2004.

It is the Government’s view that the balance struck in this legislation is correct, in that there are proper checks and balances in the system and also support for people who want to change their legal sex.

We will make the gender recognition certificate process kinder and more straightforward. We will streamline the administrative process and cut bureaucracy by enabling applications via gov.uk and we will also reduce the fee from £140 to a nominal amount.

We know from our research that improving healthcare support is a priority for transgender people. That’s why we’re opening at least three new gender clinics this year, which should see waiting lists cut by around 1,600 patients by 2022, and why the GEO is providing funding for the Dr Michael Brady, the UK’s National LGBT Health Advisor, and working with him and the NHS to improve transgender people’s experience.

It is also important that we protect single-sex spaces in line with the Equality Act. The law is clear that service providers are able to restrict access to single sex spaces on the basis of biological sex.