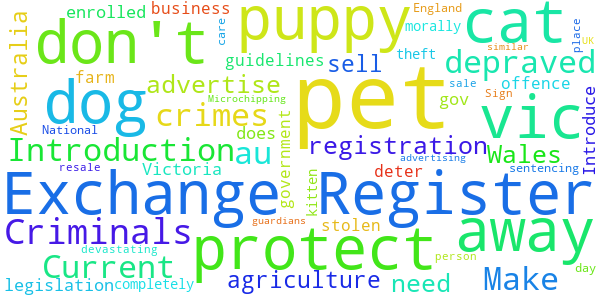 At least 5 dogs are stolen every day in England & Wales. These crimes are morally depraved and completely devastating.

Microchipping alone does not protect our pets from theft and resale.
Current sentencing guidelines don't deter.

The UK government *must* do more to protect pets and their guardians.

The Government responded to this petition on Wednesday 17th March 2021

The commercial sale of pets is already regulated in England, the Government is actively considering how to tackle pet theft and we note the request for a national pet exchange register.

The Government is sympathetic to the emotional trauma which the theft of a much-loved pet can cause. All reported crimes should be taken seriously, investigated and, where appropriate, taken through the courts and met with tough sentences. The theft of a pet is a criminal offence under the Theft Act 1968 and the maximum penalty is seven years’ imprisonment.

If someone causes an animal to suffer in the course of stealing it, they are also liable to prosecution under the Animal Welfare Act 2006. The existing maximum custodial penalty for causing animal cruelty is six months’ imprisonment. Legislation is currently before Parliament – the Animal Welfare (Sentencing) Bill – which when passed will increase the maximum penalty to five years’ imprisonment. This will be the highest penalty for animal cruelty in Europe. The Government is supporting this Bill as it makes its way through Parliament.


The Government takes the issue of pet theft very seriously and is concerned by suggestions that occurrences are on the rise. As the Farming, Fisheries and Food Minister, Victoria Prentis MP said in October 2020, on behalf of the Government at a Westminster Hall debate on pet theft, we continue to keep the situation under review and are keen to explore ways to address the issue that will be effective and have a meaningful impact. We will also work with interested parties, including animal welfare organisations to help owners keep their pets safe. We take note of the proposal to establish a national pet exchange register.

The Government has already taken significant steps to tackle illegal and low-welfare supply of pets. Since October 2018 it has been a requirement under the Animal Welfare (Licensing of Activities Involving Animals) (England) Regulations 2018 for anyone who is in the business of selling animals as pets, or who breeds dogs and advertises a business of selling them, to need a valid licence from their local authority. Licencees must meet strict statutory minimum welfare standards which are enforced by local authorities who have powers to issue, refuse or revoke licences. Any licensee advertising animals for sale will need to include their licence number in the advert and specify the local authority who issued the licence. Additional requirements placed on advertisements include a need for all adverts to display the age of the animal along with a recognisable photograph. These requirements are designed to improve transparency of sale.

Commercial third-party sales of puppies and kittens were banned in England from 6 April 2020. This prevents pet shops, pet dealers and other commercial outlets from selling these animals in England unless they themselves have bred them. Anyone who is in the business of selling puppies or kittens without a licence, could receive an unlimited fine or be sent to prison for up to six months. In addition to, and ahead of, the ban coming into force, Defra launched a national communications campaign (Petfished) to raise awareness of issues associated with low-welfare and illegal supply of pets. This includes providing clear signposting on where responsible breeders and rehoming centres can be found and encouraging prospective buyers to research the seller thoroughly before they visit and decide to purchase. The campaign provides a list of red flags for buyers to look out for when searching for a pet online. More information can be found here: https://getyourpetsafely.campaign.gov.uk/

The Pet Advertising Advisory Group (PAAG) was created in 2001 to combat growing concerns about the irresponsible advertising of pets for sale, rehoming, and exchange. The Group comprises animal welfare organisations, trade associations and veterinary bodies. PAAG is endorsed by Defra, as well as other Governments, and has been engaging with online marketplaces in the UK to help them distinguish appropriate adverts from those that should be removed. Defra has also backed a set of Minimum Standards that PAAG developed which several of the UK’s largest classified websites have agreed to meet.

The proposal for a national pet register would seem to involve applying a registration requirement to all people who are not considered to be operating on a commercial basis and hence do not currently need to be licensed. Consideration of such a system would need to weigh the possible benefits in terms of addressing pet theft with the associated burdens and requirements placed on all individuals, the vast majority of whom are engaged in entirely legitimate activity, and would also need to consider if there are better options for tackling pet theft.

If anyone has any concerns about the welfare of an animal that is being sold they should report the matter to the relevant local authority who have powers to investigate.