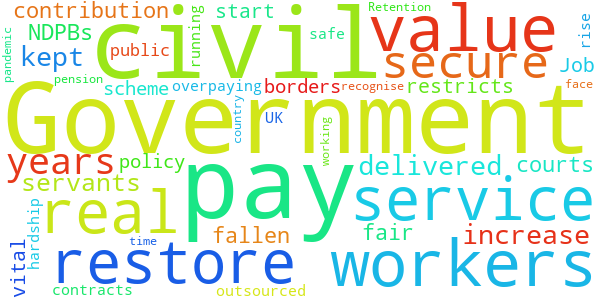 During the pandemic government workers have delivered vital public services and kept our country safe and secure. After ten years in which the real value of civil service pay has fallen, many face hardship. The Government must start to restore the real value of their pay with a 10% increase in 2020.

Government workers are UK civil servants, those working for NDPBs and on outsourced government contracts. Civil service pay has fallen in value by up to 20% over 10 years. Civil servants have been overpaying pension contributions. Government pay policy for 2020 restricts increases to 1.5-2.5%. Government workers have delivered the Job Retention scheme, kept our courts running and our borders secure. It’s time to recognise their contribution and restore the real value of their pay.

The Government responded to this petition on Friday 16th October 2020

The 2020/21 pay remit guidance allows departments to make pay awards between 1.5 and 2.5%. We believe this achieves a balance of fair pay for civil servants and value for money for taxpayers.

The Coronavirus pandemic is the biggest threat the UK has faced in decades, it has clearly had a significant impact on the UK economy. We share this in common with almost every other major country in the world. HM Treasury will continue to take stock of the economy as we move towards the next spending review, planned for later this year.

Civil servants have already demonstrated remarkable commitment to keeping the public safe in the continuing fight against the virus. The ‘Here For You’ campaign has showcased just some of the many ways civil servants across the country have been contributing, and continue to contribute, to the Government's COVID-19 response. Much of the work highlighted in the campaign has been achieved whilst working from home, including such initiatives as HMRC's Employee Retention Scheme.

In order to continue to deliver public services which are vital for the nation, it is important that pay continues to balance rewarding civil servants for their hard work with providing value for money to the taxpayer. In May 2020, public sector pay was up by 3.7% on the year before, compared to a fall of 1.2% in the private sector. Furthermore, this financial year’s public sector pay awards, including those of Civil Service Departments, will be significantly more than the average in the private sector, where the Office of Budget Responsibility’s central scenario assumes a fall in average earnings. This year’s Civil Service Pay Remit Guidance allows departments to make pay awards between 1.5% and 2.5%, achieving a balance that offers fair pay for civil servants, while delivering value for money for the taxpayer.

These arrangements therefore allow departments as much flexibility as possible in agreeing a pay award, depending on their cost pressures. There is additional flexibility to go beyond the limits set out above by submission of a business case to the Cabinet Office and HM Treasury in exchange for plans to improve workforce productivity.

In addition to the pay award, most Departments continue to offer non consolidated performance related awards to ensure the best performers can be recognised in this way.

Departments are able to fund the legal requirements of increases to the National Living Wage (NLW) and statutory Holiday Pay for worked overtime outside of the 1.5% to 2.5% range.

The Civil Service Pension Scheme is one of the most generous pension schemes available in the UK and members of the Civil Service Pension Scheme pay some of the lowest contribution rates across the public sector. When comparing civil servants’ remuneration with other professions, it is important therefore to consider total reward.
Member contributions are set every four years following the completion of a scheme valuation, specifically a cost control assessment. The 2016 assessment indicated that the member benefits needed to be improved, or their contributions cut, with effect from April 2019. However, in December 2018 the Court of Appeal found that the transitional protection used during the 2015 pension reform process amounted to age discrimination (the McCloud judgment). Following the judgment the
Government announced a pause to the cost control element of the 2016 valuations. It was right to pause the mechanism, as the uncertainty around member benefits arising from the McCloud judgment made it impossible to assess the value of the schemes to members with any certainty.

In light of the developments to address the McCloud judgment, and as the associated uncertainties recede, the Government has announced that the pause should be lifted. HM Treasury will set out how the cost of providing the additional member benefits required to remedy the age discrimination should be taken into account in the cost control element of the valuations process and the government will then consider how best to take forward the outcome of the 2016 cost cap for civil service pensions once the detail of these is known.

This petition was debated in Parliament on Monday 14th December 2020