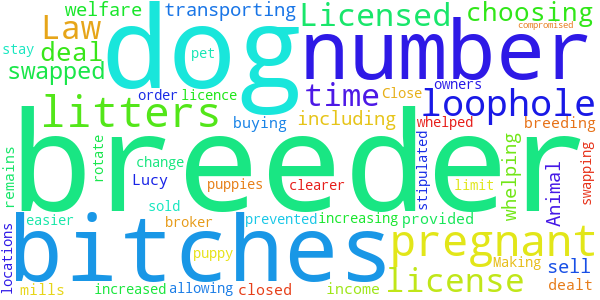 Licensed breeders can rotate their breeding bitches, buying in pregnant bitches swapping them for whelped. Breeders can stay within their license at any one time and always have pregnant and whelping bitches, increasing litters dealt with and sold by 5 times the number of dogs on their license.

Animal welfare can be compromised when dogs can be swapped and change locations in order to give a breeder increased income. Some of these dogs can be provided by puppy mills and is easier than transporting puppies, which Lucy’s Law has prevented. There remains this loophole in the law and this can be closed by including a limit on the number of litters a breeder can deal with or sell which is the same as the number of dogs stipulated on the licence. Making choosing a breeder clearer for pet owners.

The Government responded to this petition on Thursday 10th September 2020

In 2018 the Government updated statutory requirements on licensed dog breeders in England. We are confident that these protect the welfare of breeding dogs and their puppies and improve transparency.

Recently introduced statutory requirements on licensed dog breeders in England are designed to protect the welfare of breeding dogs and puppies and improve transparency for prospective buyers.

The law on the breeding of dogs was updated and much improved in 2018. Under The Animal Welfare (Licensing of Activities Involving Animals) (England) Regulations 2018 (the 2018 Regulations) no animals or types of animal other than those animals and types of animal specified in a dog breeding licence may be used in relation to this activity. The licence conditions must clearly state the total numbers of dogs that are kept for the licensable activity permitted at the premises including puppies.

All licence holders are required to keep accurate records of both their breeding dogs and puppies they have bred, and statutory minimum animal welfare standards must be adhered to. Any licence holder failing to maintain such standards can have their licence revoked by the local authority.

There are restrictions around minimum ages and the number of times a bitch can be bred from. In relation to each breeding bitch, records must be kept of its name, sex, breed, description and microchip details as well as the numbers of mating, its age at the time of each mating, the number of its litters and the date or dates on which it has given birth. In addition to this, breeding bitches must be adequately supervised during whelping and the licence holder must keep a record of all puppies they have bred including the date and time of birth, each puppy’s sex colour and weight, and the number of puppies in each litter.

To demonstrate breeding, the licence holder’s involvement in the complete reproductive route from conception and gestation to birth must be evident. A local authority inspector must be shown details of the mating(s) and both parents (including where this may have occurred on other premises).

Breeders have a responsibility to care for their animals appropriately and must be able to document how both puppies that do not sell, or bitches and dogs that are no longer able to breed are cared for or rehomed. If any animal is deemed unsuitable for breeding, and the owner of the animal is unwilling or unable to keep it as a domestic pet, then they must be appropriately rehomed.

We strongly encourage anyone thinking of buying a puppy to think carefully before making a purchase. In March 2020, the Government launched a national communications campaign ‘Petfished’ https://getyourpetsafely.campaign.gov.uk/ to raise awareness of the consequences of buying from a low-welfare seller and to help people make informed choices when sourcing a new pet.

For anyone buying a dog from a breeder, we recommend they use the Kennel Club’s Assured Breeder Scheme or buy from a licensed dog breeder (whose licence number must be shown in any advert). We encourage people to use the Puppy contract, which a good breeder will be happy to sign up to. Acquiring a puppy from reputable sources means that the dog is healthier, and its welfare needs have been met.

If anyone has any concerns about the welfare of dogs or puppies at a dog breeding establishment they should report it to the relevant local authority who have powers to investigate.