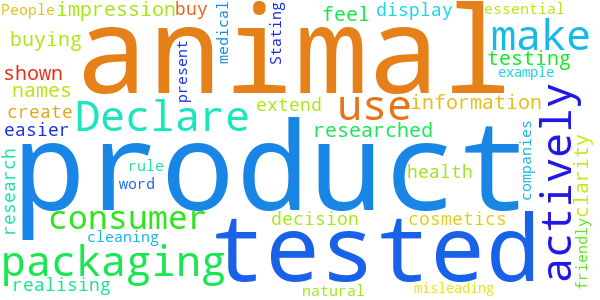 At present, if a product is NOT tested on animals it is often shown on the packaging. The consumer has to actively research products that do not display this information. Every product (cosmetics/cleaning products) should have to declare that this product is tested on animals.

To make it easier for consumers to make a decision when buying a product. People who feel they are against animal testing, but have not actively researched every product they buy may use a product without realising it was tested on animals. Many companies use misleading product names, the word natural, for example, to give the impression they are animal friendly. Stating “tested on animals” would create clarity. I would not extend this rule to medical products as these are essential to health.

The Government responded to this petition on Tuesday 24th November 2020

The UK has a robust legislative framework for animal welfare, and consumer protection rules that prohibit misleading or deceptive trading. The Government has no plans to introduce new measures.

This government is committed to maintaining high standards of animal welfare in science. The UK has a robust legislative framework for animal welfare, and consumer protection rules that prohibit misleading or deceptive trading.

The UK’s rigorous regulatory system requires that no testing takes place if there is a validated non-animal alternative that would achieve the scientific outcomes sought. Project licence proposals for research on animals for which there is no non-animal alternative must comply fully with the principles of the 3Rs: replacement, reduction and refinement.

The testing of cosmetics and their ingredients on animals in the UK has been banned since 1998 and the UK has been instrumental in introducing this ban across the European Union and beyond. In 2015 the Government implemented a ban on the testing of finished household products on animals as well as a qualified ban on household product ingredients. This ban was a clear statement of the UK’s commitment to animal welfare.

The Consumer Protection from Unfair Trading Regulations 2008 (CPRs) are in place to protect consumers from being misled about the products or services they buy. The CPRs prohibit traders in all sectors from engaging in misleading and deceptive commercial practices (primarily in the course of marketing and advertising) against consumers to the extent that they are likely to lead a consumer to make a decision which they otherwise would not have made. This includes false or misleading statements on products as to whether, for example, they have been tested on animals or not. The Regulations also cover the omission of material information where goods are offered direct for sale to consumers and where the omission would be likely to affect the transactional decision of the average consumer.

In addition, there are controls in place on advertising in the UK. These are primarily by self-regulation under which the Advertising Standards Authority (ASA) has responsibility for ensuring compliance with the British Code of Advertising, Sales Promotion and Direct Marketing. The Code is a body of rules by which the industry agrees to abide. It requires all forms of advertising to be legal, decent, honest, truthful and prepared with a sense of responsibility to both consumer and society. The ASA are happy to look into concerns and details of how to complain can be found on the ASA’s website at: https://www.asa.org.uk/.

Given the UK’s rigorous regulatory system in this area, and the current consumer protection rules that prohibit misleading or deceptive trading, the Government has no plans to introduce new measures at this time.

This is a revised response. The Petitions Committee requested a response which more directly addressed the request of the petition. You can find the original response towards the bottom of the petition page (https://petition.parliament.uk/petitions/332059)