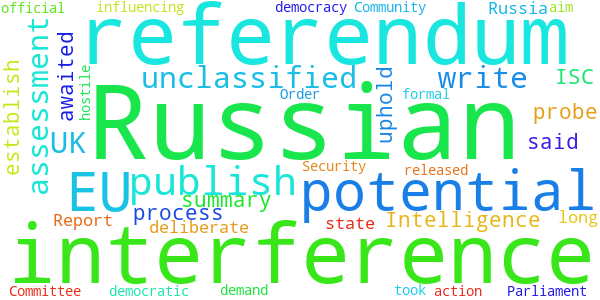 They must take on the formal demand from the Parliament's Intelligence and Security Committee to write a full assessment of potential Russian interference in the EU referendum and publish an unclassified summary.

The long awaited Russia Report has been released and the The ISC said the UK Intelligence Community should now write an assessment of "potential Russian interference in the EU referendum" and publish an "unclassified summary", "to establish whether a hostile state took deliberate action with with the aim of influencing a UK democratic process."This must be done to uphold our democracy.

The Government responded to this petition on Wednesday 23rd September 2020

We have seen no evidence of successful interference in the EU Referendum. We regularly assess threats posed by hostile state activity and have published our response to the Russia Report.

We have seen no evidence of successful interference in the EU Referendum. The Intelligence and Security Agencies produce and contribute to regular assessments of the threat posed by Hostile State Activity, including around potential interference in UK democratic processes. We keep such assessments under review and, where necessary, update them in response to new intelligence. Where new information emerges, the Government will always consider the most appropriate use of any intelligence it develops or receives, including whether it is appropriate to make this public. Given this long standing approach, there are no plans to publish a retrospective assessment on the EU Referendum.

It is, and always will be, an absolute priority to protect the UK against foreign interference. In July 2019, we established the Defending Democracy programme, bringing together expertise and capabilities from across Government departments, the Security and Intelligence Agencies and civil society to ensure UK democracy remains open, vibrant and secure.

During the 2019 General Election and European Parliamentary election, we introduced a cross-Government election cell to monitor and respond to emerging issues during election periods. We provided cyber and protective security guidance for local authorities, candidates and political parties. In addition, the National Cyber Security Centre meets regularly with the UK’s Parliamentary Parties, and works closely with those responsible for core parts of the UK’s electoral infrastructure, including the Cabinet Office’s ‘Register to Vote’ service.

Also during that period and throughout the COVID-19 pandemic, we established a cross-Whitehall Counter-Disinformation Unit (CDU). This brings together cross-Government capabilities to provide a comprehensive picture of the extent, scope and potential impact of disinformation.

Interference in any democracy is an international issue. That is why the UK will continue to call out and respond to malign activity, including any attempts to interfere in our democratic processes, alongside our international partners including the Five Eyes and NATO.

As announced in the Queen’s Speech, we are bringing forward new legislation to provide the security services and law enforcement agencies with the tools they need to disrupt hostile state activity.

The Law Commission is currently reviewing the Official Secrets Acts (OSAs) as part of their report on the Protection of Official Data. The OSAs are the only pieces of UK legislation that currently exist to specifically address hostile activity by foreign states, other than the ports stop power the Government introduced in the Counter-Terrorism and Border Security Act 2019. The Government will carefully consider the recommendations for reform post publication.

The Government remains committed to ensuring elections are secure and fit for the modern age. As part of this, we will introduce a digital imprints regime and in August 2020 we launched a technical consultation on our proposed regime. These proposals represent a significant step forward and will make UK politics even more transparent. The Government's 2019 manifesto also pledged measures to prevent any foreign interference in elections.

The Government welcomed the ISC’s report on Russia. The Government's response to the report was published on the same day as its release. It is available here: https://www.gov.uk/government/publications/government-response-to-intelligence-and-security-committee-russia-