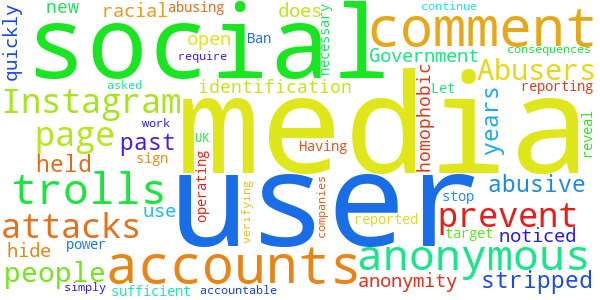 The Government should require social media companies operating in the UK to prevent the use of anonymous accounts, if necessary verifying their users, to stop trolls abusing people without any consequences.

Having been a target of racial and homophobic attacks on Instagram over the past few years I have quickly noticed that reporting a page or comment does not work. Users simply open a new page and continue their attacks.

Abusers on social media hide behind the power of anonymity and that should be stripped. If Instagram asked for sufficient identification on sign up. When an abusive comment is reported. That user WILL be held accountable. Let the trolls reveal themselves!

The Government responded to this petition on Monday 10th August 2020

Being anonymous online does not give anyone the right to abuse others. The Government is introducing world-leading legislation to make the UK the safest place in the world to be online.

There has been a worrying rise in the amount of online abuse, much of which happens on social media, but not exclusively so. In many cases, the perceived anonymity of offenders adds a further frightening experience for victims, with this abuse often leaving a lasting impact on individual mental health. Whether the identity of the victim is known or unknown, this abuse is unacceptable. The Government is taking urgent action to tackle abuse online.

We expect companies to do substantially more to tackle anonymous abuse online. The Online Harms White Paper, published in 2019, will establish in law a new duty of care on companies towards their users which will be overseen by an independent regulator. This regulator will set clear safety standards, backed up by mandatory reporting requirements and strong enforcement powers to deal with non-compliance.

The Government published its Initial Consultation Response to the Online Harms White Paper in February 2020, which set out our direction of travel on a number of key areas. We are aiming to publish a full government response to the Online Harms White Paper consultation later this year. This will include more detailed proposals on online harms regulation and will be released alongside interim voluntary codes on tackling online terrorist and child sexual exploitation and abuse content and activity. DCMS and the Home Office are working at pace to develop the legislation and it will be ready early next year.

Alongside measures set out in the White Paper, we are taking a holistic approach to tackling abuse online. The police have a range of legal powers to identify individuals who attempt to use anonymity to escape sanctions for online abuse, where the activity is illegal. We are also working with law enforcement to review whether police powers are sufficient to tackle anonymous abuse online.

It is important to make sure that the criminal law is fit for purpose to deal with online harms. The Law Commission is conducting the second phase of its review of abusive and offensive online communications. This will include considering whether co-ordinated harassment by groups of people online could be more effectively dealt with by the criminal law. The Law Commission will review existing communications offences and make specific recommendations about options for reform, to ensure that criminal law provides consistent and effective protection against such behaviour. We expect the Law Commission to produce its final report in early 2021.

But online anonymity is an important principle of a free and open internet. There are many legitimate reasons why an individual would not wish to identify themselves online. Whistle-blowers, victims of modern slavery and survivors of domestic abuse may need to conceal their identity online. Globally, anonymity can be an especially important component in protecting human rights and allowing journalists to operate, especially within authoritarian regimes, without fear of undue reprisal and detention. This would also apply to human rights defenders and journalists from abroad posting on UK-hosted sites.

The Online Harms regulatory framework sets out robust measures which companies will need to comply with to tackle abuse online. These will be counterbalanced with freedom of expression and the many legitimate reasons for individual anonymity online.