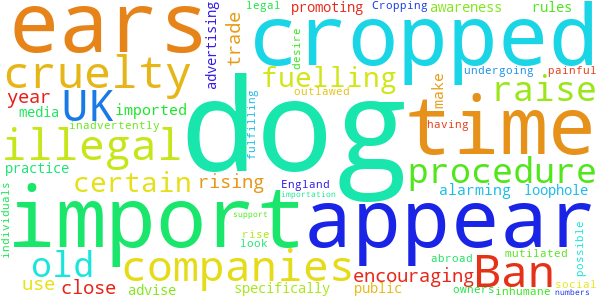 Ban the importation of dogs with cropped ears.

Ban the importation of dogs with cropped ears.

There appears to be an alarming rise in dogs imported after undergoing the inhumane procedure of having their ears mutilated, fulfilling the desire for a certain ‘look’ & encouraging a procedure outlawed in England since 1899. It’s time to close this 121-year-old legal loophole.

Cropping a dog’s ears is illegal in the UK, yet the numbers appear to be rising. An import ban could be possible under trade rules. There are companies that specifically import dogs with cropped ears for UK owners fuelling cruelty abroad. It’s time to make imports illegal, raise awareness of the cruelty around cropped dogs & advise the public not to support companies/individuals that use cropped dogs in advertising & social media, as they’re inadvertently promoting this painful practice.

The Government responded to this petition on Tuesday 20th October 2020

Cropping dogs’ ears is abhorrent, is banned here, and after January 2020 the Government will explore options to tackle imports of mutilated dogs, consistent with World Trade Organisation rules.

Animal welfare, including the welfare of imported animals, is a priority for this Government. In the UK it is an offence to carry out a non-exempted mutilation under the Animal Welfare Act 2006 (the 2006 Act). Anyone found to be illegally cropping a dog's ears may be banned from owning animals, face an unlimited fine or be sent to prison for up 6 months, or both.

The Government supports increasing the maximum custodial sentences for animal cruelty offences (of which non-exempted mutilation is one) from 6 months imprisonment to 5 years. The Animal Welfare (Sentencing) Bill was introduced into the House of Commons by Chris Loder MP on 5 February. Second Reading is due on 23 October. The Government will continue to support this as it makes its way through Parliament. The new maximum penalty of 5years will send a clear signal to any future potential offenders that animal cruelty will not be tolerated.

The Government is taking steps to ensure that the illegal importation of pets is stopped, and that pets brought into the UK through legal means receive a high standard of care, including during their transportation.

The Government has powers to intervene on animal welfare grounds. Importers of animals must adhere to welfare standards as set out in Council Regulation (EC) 1/2005 on the protection of animals during transport and in domestic legislation, The Welfare of Animals (Transport) (England) Order 2006 (WATEO). This legislation aims to protect the health and welfare of animals during transportation and applies to dogs that are suffering injury as a result of non-exempted mutilations.

There are powers under the WATEO for inspectors to instruct the transporter to unload and seek immediate veterinary treatment if required for any open wounds or infections as a result of a non-exempted mutilation and where a person fails to comply with the requirements of a notice served under Article 24 of The Welfare of Animals (Transport) (England) Order 2006, an inspector may take any steps he considers necessary to ensure the requirement is met.

The Government also continues to raise awareness regarding the improper selling of pets by deceitful sellers in the UK and abroad through our ‘Petfished’ campaign, which seeks to educate prospective pet buyers on common tricks and tactics used by deceitful sellers which may result in the purchase of a mistreated or unwell pet including those who have been subject to cropping. The campaign urges buyers to mitigate risks, for example by buying from trusted sellers such as those under the Kennel Club’s Assured Breeder scheme, viewing puppies with their mothers and siblings, asking questions of the seller and following the Animal Welfare Foundation and RSPCA Puppy Contract to ensure that puppies are in good health when purchased.