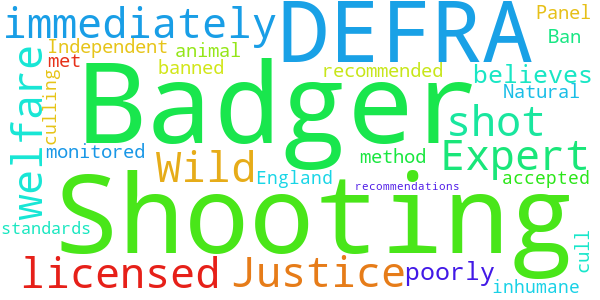 Ban the shooting of badgers immediately

Ban the shooting of badgers immediately

Shooting of Badgers is licensed by Natural England as part of the DEFRA Badger cull. 24,000+ Badgers were shot in 2019.

Shooting is poorly monitored and Wild Justice believes it has never met the animal welfare standards recommended by a 2014 Independent Expert Panel, whose recommendations were accepted by DEFRA. This method of culling is inhumane and should be banned immediately.

The Government responded to this petition on Monday 12th October 2020

Natural England carries out compliance monitoring and ensures that each cull company has suitable arrangements and plans in place to carry out an operation that is safe, effective and humane.

Bovine TB (bTB) is one of the most difficult and intractable animal health challenges that England faces today. Around 30,000 cattle are slaughtered annually due to infection. Our cattle breeders suffer the loss of prize-winning animals and valued herds and this loss creates considerable trauma in the farming industry. It is important to bear in mind that, if left unchecked, bTB could pose an increased risk to animal and human health. It is a particular threat to the dairy and beef industries, which form part of an agri-food sector that contributes billions of pounds to the UK economy each year.

Our 25-year strategy to eradicate bTB in England is founded in science. It applies the lessons learnt from previous attempts to control the disease, as well as drawing evidence from other countries, trial work conducted in the UK during the 1970s and, more recently, the Randomised Badger Culling Trial conducted between 1998 and 2007.

Since the initial badger culls in 2013, a policy of badger control has been rolled out to other parts of the High-Risk Area (HRA) in the south-west and west of England. As of the end of 2019, 57% of the HRA is now subject to a licensed cull of badgers. This policy is starting to yield results. The latest peer-reviewed epidemiological analysis has shown that the incidence of the disease in the first cull areas of Somerset and Gloucester fell substantially, by 37% and 66% respectively relative to comparison areas.

The Secretary of State for Environment, Food and Rural Affairs entered into an agreement with Natural England (NE) in October 2006 under the Natural Environment and Rural Communities Act 2006 authorising it to perform specified wildlife licensing functions, including those under the Wildlife and Countryside Act 1981 and the Protection of Badgers Act 1992. NE is therefore responsible for granting, modifying or revoking badger control licences under the 1992 Act.

Natural England (NE) carries out compliance monitoring which includes observations of controlled shooting in the field, and the results are published each year on GOV.UK. All applications that are received are carefully assessed by NE to ensure that each cull company has suitable arrangements and plans in place to carry out an operation that is safe, effective and humane.

NE’s Chief Scientist advised that marksmen continued to show high levels of discipline and compliance with the Best Practice Guide in 2019. The level of accuracy of controlled shooting continued to compare favourably with the range of outcomes when other control activities, currently accepted by society, have been assessed.

However, the badger is an iconic, protected species. No one wants to cull them forever, and widespread badger culling was only ever envisaged as a phase of the strategy, not a perpetual state of affairs. Therefore, five years into the current strategy, it is appropriate to take stock and consider how our strategy might be evolved. That is why the government asked Professor Sir Charles Godfray to conduct a review, which concluded in October 2018.

The Godfray Review is clear that the evidence indicates that presence of infected badgers does pose a significant threat to local cattle herds. The review also considers that moving from lethal to non-lethal control of disease in badgers is desirable.

The Government's response to Professor Sir Charles Godfray's review noted that while it is important to retain the ability to introduce new cull zones where epidemiological evidence points to a reservoir of disease in badgers, we envisage that any remaining areas would join the current cull programme in the next few years and that the badger cull phase of the strategy would then wind down by the mid to late 2020s. This plan has not changed. It is unrealistic to switch immediately to badger vaccination, but we are already doing a great deal to make sure the transition happens. Culling would, however, remain an option thereafter where epidemiological assessment indicates that it is needed.

In July, the government announced that world-leading cattle bTB vaccination trials are set to get underway in England and Wales as a result of a major breakthrough by government scientists. These trials enable work to accelerate towards planned deployment of a cattle vaccine. While the candidate BCG vaccine will never provide full protection, it promises to be a valuable additional tool if deployed with a test to detect infected cattle among vaccinated cattle (DIVA test). Government scientists have now developed a candidate DIVA test. The government is committing the funding necessary to accelerate field trials towards the aim of securing marketing authorisations for both the vaccine and the DIVA test by 2025.

There is no single answer to tackling the scourge of bTB but by deploying a range of policy interventions, we can turn the tide on this terrible disease and achieve our long-term objective of eradicating it in England by 2038.