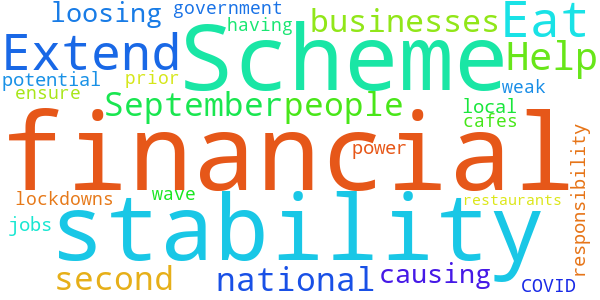 Extend the Eat Out to Help Out Scheme to September

Extend the Eat Out to Help Out Scheme to September

Extend the Eat Out to Help Out Scheme to September to give restaurants and cafes financial stability prior to a potential second wave of COVID-19 causing local/national lockdowns.

The government have the power and the responsibility to ensure people are not loosing their jobs due to businesses having a weak financial stability.

The Government responded to this petition on Tuesday 22nd September 2020

Eat Out to Help Out was just one part of a wider package of support for jobs in the hospitality sector. It succeeded in helping restore consumer confidence and has now been wound down as planned.

Eat Out to Help Out (EOHO) was introduced to help restore consumer confidence in eating in at restaurants and cafes which in turn would support 129,000 businesses and help protect almost 2 million jobs. To encourage people to return to eating out, the Government launched the time-limited scheme, entitling everyone to a 50% discount on their meal, up to £10 per head, at any participating restaurant, café, pub or other food service establishment on Mondays, Tuesdays and Wednesdays in August. This was aided by business owners who worked hard to implement social distancing guidelines and make their premises safe.

The scheme was part of a wider package of support for the hospitality sector, including cutting VAT to 5%, paying the wages of furloughed staff, business rates relief and billions in tax deferrals and loans – all helping to protect nearly 2 million jobs in the hospitality industry.

By midnight 31 August, there had been 100 million meals claimed for as part of the scheme, and early data indicated it had increased consumer confidence. Open Table data shows that in the final full week of the scheme, seated diner numbers were up 65% compared to 2019 and up 95% on EOHO days. Having provided a successful boost to the hospitality sector as intended, EOHO was wound down as planned and will not be extended.

The Government will continue to monitor developments, engage with the sector and keep under review the case for further interventions to support business growth and employment.