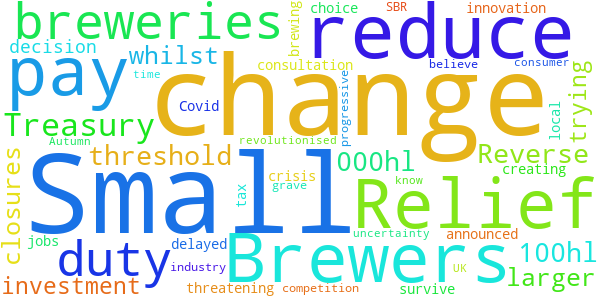 The Treasury has announced changes to Small Brewers Relief (SBR) – the progressive tax system that has revolutionised UK brewing. These changes will reduce the 50% duty threshold from 5,000hl to 2,100hl: small breweries will have to pay more duty, whilst larger breweries could pay the same or less.

Those that will have to pay more do not know by how much as the consultation has been delayed until the Autumn. This is creating grave uncertainty for many small breweries at a time when the industry is trying to survive the Covid-19 crisis.

We believe the Treasury should not reduce relief for any brewers below 5,000hl and should reverse its decision to reduce the threshold to 2,100hl, and that these changes are threatening closures, innovation, competition, local jobs, investment and consumer choice.

The Government responded to this petition on Thursday 27th August 2020

The Government is reforming SBR to address issues raised by brewers. Over 80% of brewers are unaffected by these changes and many will benefit. We will consult further this Autumn.

The Government has been reviewing Small Brewers Relief (SBR) for the last two years in response to feedback from brewers that it was not working as intended. The changes recently announced will ensure that the scheme remains fit for purpose in the long run. The scheme will remain one of the most financially generous in Europe, and over 80% of brewers will be unaffected as they produce less than 370,000 pints a year (2,100 hectolitres).

Small Brewers Relief (SBR) was introduced in 2002 and provides small independent breweries with a discount off their beer duty bills. Currently, brewers receive 50% off until they reach 880,000 pints (5,000 hectolitres) annual production, when a formula tapers the relief down to 0% at 10.5 million pints (60,000 hectolitres). This taper reduces rapidly, meaning a brewer at 1.3 million pints (7,500 hectolitres) receives only 33% off.

For many years, brewers have highlighted that flaws in the scheme’s design cause unintended consequences such as making it hard to grow beyond the 880,000 pints level. The Treasury therefore announced at the 2018 Budget it would review the relief.

As part of this review, we have received and considered responses from over 300 breweries who get SBR. There were a range of views about the right way forward for SBR, and no industry consensus.

In July, we announced that in response to this evidence, we would reform the scheme by abolishing the current scheme taper and replacing it with a more generous one that would start at 370,000 pints (2,100 hectolitres). We also announced we would convert the scheme to a cash basis, to be reviewed annually, and will consult on the potential for a grace period for breweries that merge.

As with any such relief, there has to be a point at which the full relief ends and brewers start to transition to the main duty rate. This was a source of great interest during the first stage of the review and we wanted to give clarity on this before moving on to consult on other details.

Having reviewed all the evidence, particularly on industry production costs, we consider that starting the taper at 370,000 pints strikes the right balance between guaranteeing the great majority of the smallest breweries the full value of the relief, while providing those who want to expand and grow a gentler transition to the main duty rate. The Treasury considers that a brewery producing more than 1,000 pints a day is starting to transition from being a microbrewery. The industry has also changed significantly since the relief was introduced in 2002. However, we would like to emphasise that the taper beyond the 370,000 pints point will not be the same as at present and will be more gradual.

While we empathise with brewers facing difficult trading conditions in the wake of COVID-19, the Government has acted to support the brewing sector through its unprecedented coronavirus response. Final changes will not take place until 1 January 2022 at the earliest, to ensure those small brewers who are affected have time to adapt.

We will be consulting in the Autumn on further technical aspects of reforming the relief including the shape of the new taper. We would encourage all brewers who receive SBR and other interested groups to respond to that consultation.