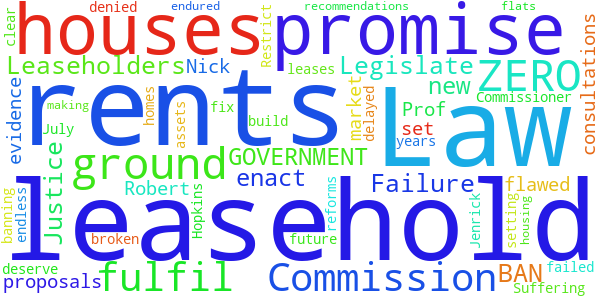 Suffering leaseholders have endured endless consultations & years of failed reforms. Government must fulfil the promises made in 2017 to legislate to:

1. BAN leasehold houses
2. Restrict all ground rents on new leases to ZERO
3. Enact ALL of the Law Commission proposals

The evidence is clear, Leasehold law is flawed. Failure to enact the Law Commission’s recommendations and banning leasehold houses & setting future ground rents to ZERO is a failure to fix the broken housing market

The Law Commission proposals are about “making our homes ours, rather than someone else’s assets” Prof Nick Hopkins, Law Commissioner

The Government responded to this petition on Wednesday 28th October 2020

The Government has confirmed it will ban the sale of new leasehold houses and restrict grounds rents to zero for future leases. We will bring forward legislation as soon as parliamentary time allows.

The Government is committed to promoting fairness and transparency for homeowners and ensuring that consumers are protected from abuse and poor service. As part of this, we are taking forward a comprehensive programme of reform to end unfair practices in the leasehold market. This includes measures to ban the sale of new leasehold houses, restrict ground rents to zero for future leases, give freehold homeowners equivalent rights to challenge unfair charges, and close loopholes to prevent unfair evictions.

Given the impact of Covid-19 on the legislative agenda, and the Government’s wider priorities to restart the economy, we will bring forward leasehold legislation as soon as parliamentary time allows. However, it is worth noting that in advance of legislation the numbers of new-build leasehold houses coming onto the market has already significantly decreased: 1% of new build houses were registered as leasehold in the last three months of 2019, compared to 17% in the first three months of 2017.

As part of our reform programme, we are working with the Law Commission - an independent body which keeps the law of England and Wales under review – on a number of important areas. This includes:

- Enfranchisement: to make buying a freehold or extending a lease easier, quicker and cheaper;
- Commonhold: to remove barriers to and reinvigorate Commonhold so that consumers have a choice of tenure; and
- Right to Manage: to ensure that the law works effectively so that residents in blocks are more easily empowered to take on the management of their properties, if they wish to do so.

Finally, the Government asked the Competition and Markets Authority (CMA) to investigate potential mis-selling of homes and unfair terms in the leasehold sector. The CMA published an update in February this year which identified concerns, including high and increasing ground rents, sales practices, and use of permission fees and charges. On 4 September, the CMA announced that it was opening enforcement action focussing on certain practices of four housebuilders. The Government has welcomed the steps being taken to tackle potential mis-selling and unfair terms in the leasehold sector and wants to see homeowners who have been affected obtain the justice and redress they deserve.

The CMA has now written to the companies concerned outlining its concerns and requiring information. How the case proceeds will depend on the CMA’s assessment of the evidence. Possible outcomes include legal commitments from the companies to change the way they do business, or if necessary, the CMA could take firms to court. The Government is keeping a close eye on this issue and will consider any next steps once the CMA has progressed its enforcement action.