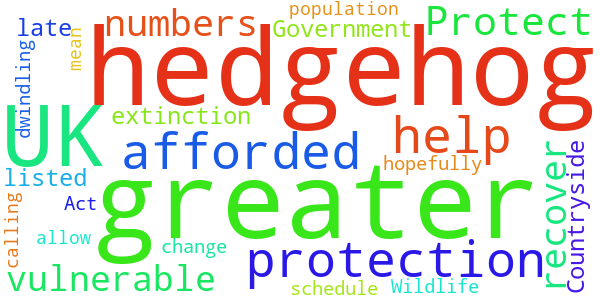 Protect the UK's dwindling hedgehog population before it's too late.

Protect the UK's dwindling hedgehog population before it's too late.

Now the hedgehog has been listed as vulnerable to extinction in the UK, we are calling on the Government to move hedgehogs to schedule 5 of the Wildlife & Countryside Act 1981 to allow them greater protection.

This change will mean hedgehogs will be afforded greater protection and hopefully help their numbers recover.

The Government responded to this petition on Monday 19th October 2020

There are currently no plans to give hedgehogs further legal protection. An evidence-based review of Schedule 5 of the Act is in progress and we will consider any recommendations arising from this.

The Government is concerned about the decline in hedgehog numbers in England and the findings of the Red List for British Mammals, published earlier this year by the Mammal Society, which has classified hedgehogs as ‘vulnerable’. As set out in the 25 Year Environment Plan, we are committed to taking action to recover our threatened native species. We are exploring the use of powers in the Environment Bill to strengthen our commitment to improve the status of threatened species, including by setting at least one biodiversity target in law, as well as enhancing duties for public authorities to carry out strategic assessments of the actions they can take to enhance and conserve biodiversity.

Hedgehogs are protected by the Wildlife and Countryside Act 1981 from being killed using prohibited methods such as crossbows, traps and snares. Whilst the reasons for the decline in numbers of this native species are complex, the Government has not previously moved to protect this species under Schedule 5 as it is not clear that such protection would be of benefit to the species, in so far that:

• we have no evidence that intentionally killing, taking or injuring hedgehogs is currently an issue; and

• it would not address the main threat of habitat loss.

The Joint Nature Conservation Committee (JNCC) has, however, recently commenced the seventh Quinquennial Review of Schedules 5 and 8 of the Wildlife and Countryside Act 1981. The JNCC will make evidence-based recommendations to the Secretary of State as to which species warrant additional legal protections to secure their future conservation. The Government will therefore consider any recommendations to add species to Schedule 5 of the Act once these recommendations have been submitted.

Defra commends the work, including research, undertaken by the British Hedgehog Preservation Society and the People’s Trust for Endangered Species, such as their Conservation Strategy for Hedgehogs. Additionally, we have published advice on how to help hedgehogs through the creation of hedgehog havens and making gardens as welcoming as possible. This can be accessed at: www.gov.uk/government/news/five-simple-steps-to-transform-gardens-in-to-hedgehog-havens.

Further to this, the revised National Planning Policy Framework sets out the Government’s policy on planning and states that the planning system should contribute to and enhance the natural and local environment by minimising impacts on, and providing net gains for, biodiversity, including by establishing coherent ecological networks.