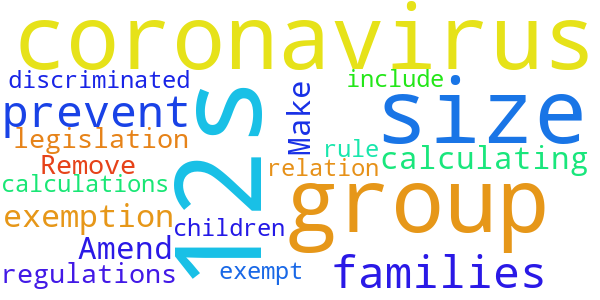 Remove under 12s from calculations of group size in relation to coronavirus regulations. This will prevent families being discriminated against.

Amend legislation to include an exemption for under 12s when calculating group sizes.

The Government responded to this petition on Monday 19th October 2020

We have set out a clear limit of 6 people of any age in all settings. This makes things easy to understand, easy to enforce by police and public health officials and reduces transmission risk.

The current coronavirus (COVID-19) outbreak, which began in December 2019, presents a significant, unprecedented challenge for the entire world. The whole of the UK has been touched by the pandemic. As such, the Government continues to introduce new measures which aim to bring the virus under control. As set out by the Prime Minister in Parliament on 22 September, the Covid-19 infection rate is rising across the country. It was vitally important that Government took decisive action to limit any further spread and reduce the likelihood of a further national lockdown of the type that was necessary earlier this year.

The “rule of six”, introduced as part of a package of measures aimed at bringing the virus under control, prohibits social gatherings of more than six people in England, apart from specific exemptions. These exemptions have been further limited to reduce the risk of Covid-19 transmission. We have set out a clear and consistent limit of six people of any age in all settings in order to make things easier to understand for the public, whilst also making enforcement easier for both police and public health officials. However, the rule of six does also exempt children in some important circumstances. These include education, formal childcare and before and after school clubs – activities such as music, drama and dance can also be undertaken in school so long as safety precautions are undertaken. However, in other social settings, if we are to beat the virus, then everyone needs to limit social contact as much as possible. Although school age children are considered at present to be at low risk of becoming seriously unwell as a result of the virus, there is however a risk that they could pass the virus to parents or other adult family members. Therefore, limiting their contact with more adults outside of education settings will help to control the spread of the virus between households

The Government appreciates that these restrictions will be difficult for many people, and households, throughout the country. However, larger households will be able to meet other people within the restrictions set out by the rule of 6. While this is the position that England has taken, health is a devolved matter and each administration has the discretion to manage the risks as they see fit.

Considerable risk remains, and significant challenges still lie ahead of us. The COVID-19 outbreak has resulted in one of the largest ever shocks to the UK economy and public finances. The impact of the virus and the measures that have had to be put in place have been far reaching, affecting people’s jobs, livelihoods and wellbeing. Despite the success in reducing the burden of the virus significantly from its peak in the spring, the coming winter will present further challenges. Co-infections between seasonal coronaviruses and other respiratory viruses are common. While interactions between COVID-19 and other viruses are not fully understood, they have the potential to be negative and are likely to be more common in winter. There are also secondary risks. The pressure on the NHS and other health infrastructure is already greater in winter due to other seasonal illnesses, such as flu. As the world’s scientific understanding is still developing, it is too early to say that we know for certain precisely how the pandemic will respond to our efforts to control it in the medium to long term. Therefore, we must continue to take steps to tackle transmission.