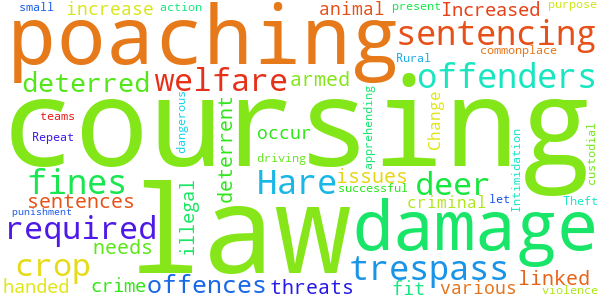 Change the law to increase sentencing for Hare coursing and poaching.

Change the law to increase sentencing for Hare coursing and poaching.

Hare/deer coursing/ poaching is illegal. At present the punishment is not fit for purpose. Repeat offenders are not deterred with the small fines handed out. Increased fines and custodial sentences are required.

As well as animal welfare issues there are various other offences that occur during coursing. From trespass, often armed trespass, crop damage, and dangerous driving. Theft and criminal damage are also linked. Intimidation and threats of violence are commonplace.
Rural crime action teams are successful at apprehending offenders, but they are let down by the law and sentencing.
There needs to be a more of a deterrent.

The Government responded to this petition on Monday 15th March 2021

The Government deplores the cruel and illegal practice of hare coursing. It is aware of the concerns raised. Poaching (including hare coursing) is one of the UK's six wildlife crime priorities.

The Government deplores the cruel and illegal practice of hare coursing. It recognises the problems and distress which poaching and hare coursing cause for local communities. Poaching (including hare coursing and poaching of deer) is one of the UK's six wildlife crime priorities, which are set for the National Wildlife Crime Unit by the UK Wildlife Crime Tasking and Co-ordination Group which is chaired by the Chief Constable Wildlife Crime lead.

All hare coursing is illegal under the Hunting Act 2004. Participants in hare coursing may also be prosecuted under other legislation, including the Game Acts (Game Act 1831 and the Night Poaching Act 1828).

The Deer Act 1991 makes clear that any person who enters any land without the consent of the owner or occupier or other lawful authority in search or pursuit of any deer with the intention of taking, killing or injuring it, is guilty of an offence.

Significant sanctions are available to the courts to hand down to those convicted of wildlife crimes, including hare coursing. The maximum penalty that can be imposed for any offence is determined in the relevant legislation.

Sentencing is entirely a matter for our independent courts. When deciding on an appropriate sentence, within the maximum penalty, the courts must take into account the circumstances of each case and consider any aggravating and mitigating factors. Where a fine is imposed, this is based on the seriousness of the offence and the court will also consider the offender’s financial circumstances and assess what they can reasonably afford to pay. Courts must also follow any relevant sentencing guidelines, issued by the independent Sentencing Council. The Council’s ‘General guideline: overarching principles sets out non-exhaustive lists of aggravating and mitigating factors which the court may consider when sentencing and guidance on the setting of a fine.

In September 2020 Defra convened a roundtable meeting with a range of rural organisations, the police and the Home Office to consider the current position on hare coursing. Hare coursing was also the subject of a Westminster Hall debate on 1 December 2020. The Government is aware of concerns that the current response to hare coursing needs to be stronger and will continue discussions with all those concerned, whilst considering what further action could be taken.