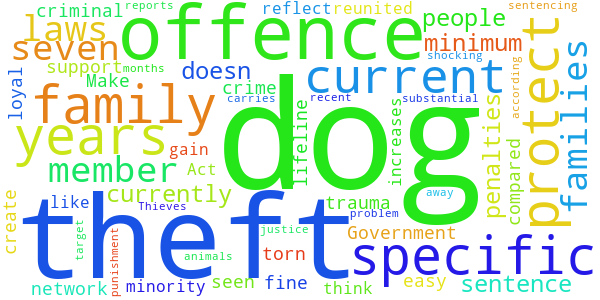 The Government should create a specific offence for dog theft, with 8 years minimum sentencing and a fine of at least £5,000. Dogs are like members of the family to many people and current laws do not reflect this. Dogs are a support network for so many, a family member, a lifeline.

There have been reports of substantial increases in dog theft in recent months, with the most loyal of animals torn away from its family. Thieves think it’s all too easy and the punishment can be nothing compared to the gain with a shocking minority of dogs being reunited with their families.
Dog theft is not currently a specific offence and the crime of theft carries a sentence of up to seven years according to the Theft Act 1968, but this doesn’t target the specific problem which is dog theft.

Dogs should be seen to have their own offence to protect them. Current laws and penalties are not enough justice for the families and dogs that go through this trauma. They protect us, so we will protect them.

The Government responded to this petition on Wednesday 20th January 2021

Current court sentencing guidelines for theft already take into account the emotional distress that theft of a family pet can have on owners, and already recommend higher penalties for such offences.

We understand the emotional trauma which the theft of a much-loved dog can cause. All reported crimes should be taken seriously, investigated and, where appropriate, taken through the courts and met with tough sentences.

The theft of a dog is already a criminal offence under the Theft Act 1968 and the maximum penalty is seven years’ imprisonment.

If someone causes an animal to suffer in the course of stealing it from its owner, then they are liable to prosecution under the Animal Welfare Act 2006. The existing maximum custodial penalty for causing animal cruelty is 6 months’ imprisonment. However, there is legislation before Parliament – the Animal Welfare (Sentencing) Bill – which when passed will increase the maximum penalty to 5 years’ imprisonment. This will be the highest penalty for animal cruelty in Europe. The Government will support this Bill as it makes its way through Parliament.

Sentencing is entirely a matter for our independent courts and must take into account the circumstances of each case. When deciding on an appropriate sentence, the courts consider any aggravating and mitigating factors, in line with sentencing guidelines issued by the Sentencing Council. In February 2016 the Sentencing Council updated its guidelines in relation to sentencing for theft offences. The guidelines take account of the emotional distress, and therefore harm, that theft of a pet can have on the victim, and accordingly recommends higher penalties for such offences.

While the Government takes the issue of dog theft very seriously and is concerned by suggestions that occurrences are on the rise, we consider the legislative tools we have in place to deal with cases of dog theft to be robust and proportionate. However, as Victoria Prentis MP said on behalf of the Government at the recent Westminster Hall debate on pet theft, we continue to keep things under review and are keen to explore ways to address the issue that will be effective and have a meaningful impact on the problem at hand. That includes working with interested parties, including the police and animal welfare organisations to try and get messages across to the pet owners to help them keep their pets safe.

It is important to raise awareness of precautions that owners can take to reduce risk of dog theft and increase the chances of owners being reunited with lost or stolen dogs. For dog owners this includes never letting their pet out of sight when it is being exercised; varying their routines when walking their dogs and not leaving their dog unattended when in public.

Owners should report the theft of their dog to the database on which the animal’s microchip is registered, along with the corresponding crime reference number. There is a much better chance that dogs who become lost or stolen will be returned to their owners if they are microchipped and their records kept up to date.