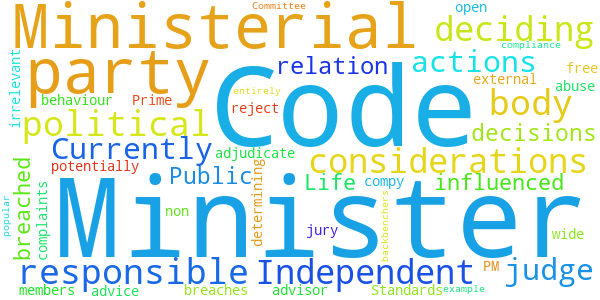 Independent body to adjudicate on compliance with the Ministerial Code

Independent body to adjudicate on compliance with the Ministerial Code

An external, non party political body (for example, the Committee on Standards in Public Life) should be made responsible for determining whether a Minister's behaviour has breached the Ministerial Code.

Currently, the Prime Minister is responsible for deciding whether a Minister's actions compy with the Ministerial Code. The PM is both judge and jury in relation to complaints and is entirely free to reject the advice of his independent advisor. The system is wide open to abuse, with decisions on breaches of the Code potentially being influenced by irrelevant party political considerations, such as whether a Minister is popular with backbenchers or party members.

The Government responded to this petition on Tuesday 16th March 2021

The Prime Minister customarily updates and issues the Ministerial Code upon assuming or returning to office. This reflects the constitutional position that it is for the Prime Minister alone to advise the Sovereign on the appointment, dismissal and acceptance of resignation of other Ministers.

The Ministerial Code sets out a clear procedure for responding to an alleged breach of the Code. Where the Prime Minister, having consulted the Cabinet Secretary, feels that an allegation warrants investigation, he can ask the Cabinet Office to investigate the facts of the case and/or refer the matter to the Independent Adviser on Ministers’ Interests.

Any investigation would be undertaken either by civil servants in the Cabinet Office, who are under a legal obligation to operate in accordance with the Civil Service Code, including the values of honesty and objectivity; or by the Independent Adviser on Ministers’ Interests. This ensures an appropriate level of independence for the investigation and ensures that free and frank advice can be provided to the Prime Minister, whilst also recognising that Ministers only remain in office for so long as they retain the confidence of the Prime Minister.