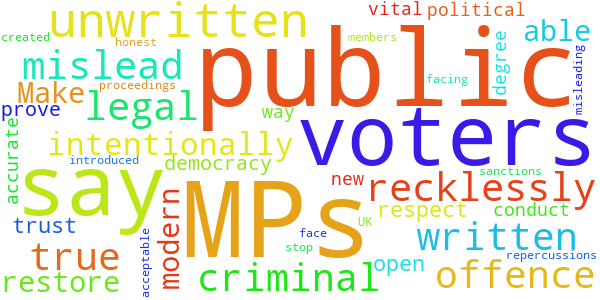 Make it a criminal offence for MPs to mislead the public

Make it a criminal offence for MPs to mislead the public

A new offence should be created and legal sanctions should be introduced to stop MPs intentionally or recklessly misleading the public. This could restore a degree of trust in the UK's political system.

MPs are able to say something written or unwritten that intentionally or recklessly misleads members of the public without facing criminal proceedings. This is not acceptable in a modern democracy. It is in the public interest that MPs who conduct themselves in this way face legal repercussions if they cannot prove what they say written or unwritten is true and accurate.

MPs must respect their voters and being open, true and honest with voters is a vital part.

The Government responded to this petition on Tuesday 26th January 2021

The Government does not intend to introduce legislation. MPs must abide by the Code of Conduct and allegations of misconduct are investigated by the Parliamentary Commissioner for Standards.

There are clear rules that govern the behaviour of candidates prior to their election to Parliament. The Electoral Commission sets out the rules for candidates during General Election campaigns, such as the type of publicity material that candidates are able to use and the rules around making false statements. You can find further information on specific electoral offences at the following website: https://www.electoralcommission.org.uk/i-am-a/candidate-or-agent/uk-parliamentary-general-election-great-britain

Once elected to Parliament, all MPs must abide by the seven principles of public life which form the basis of ethical standards expected of holders of public office. These are set out by the Committee on Standards in Public Life and are: selflessness, integrity, objectivity, accountability, openness, honesty and leadership. It is a requirement that any holder of public office must be truthful and must act and take decisions impartially, fairly and on merit, using the best evidence and without discrimination or bias.

Upon election, MPs are also subject to the House of Commons Code of Conduct and the Guide to the Rules relating to the Conduct of Members. Included in the code is a general duty on MPs to “act in the interests of the nation as a whole; and a special duty to their constituents”, alongside a requirement that MPs “act on all occasions in accordance with the public trust placed in them. They should always behave with probity and integrity, including in their use of public resources.”

The House of Commons Committee on Standards is currently conducting an inquiry into the operation of the Code of Conduct for Members of Parliament, in liaison with the Parliamentary Commissioner for Standards who will carry out an independent review of the Code. The Committee will publish a report on the code and a public consultation will follow.

The Parliamentary Commissioner for Standards oversees the application of the code and further details are available on the Parliament website at: https://www.parliament.uk/mps-lords-and-offices/standards-and-financial-interests/parliamentary-commissioner-for-standards/

Ultimately, it is right that MPs are accountable to the electorate and should uphold the highest of standards. This is also a principle recognised in the Representation of the People Act 1981 which provides that if an MP receives a custodial sentence of 12 months or more, they are disqualified from being a member of the House of Commons. The Recall of MPs Act was introduced in 2015 to allow constituents to sign a petition to recall their MP if their MP is convicted of an offence and receives a custodial sentence of 12 months or less, is convicted of an offence under the Parliamentary Standards Act 2009 or is suspended from the House of Commons for 10 or more sitting days (or 14 calendar days if the motion is not expressed in terms of sitting days). A recall petition would be successful if signed by at least 10% of the registered voters in a constituency. The recall mechanism adds to the House of Commons’ own suite of disciplinary measures and gives constituents a say over their MPs’ conduct between General Elections.


Office of the Leader of the House of Commons

This is a revised response. The Petitions Committee requested a response which more directly addressed the request of the petition. You can find the original response towards the bottom of the petition page (https://petition.parliament.uk/petitions/561730)