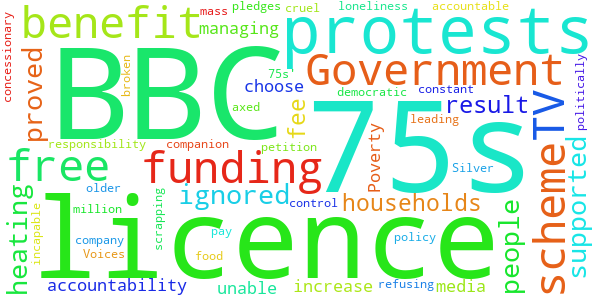 The BBC has proved incapable of managing and funding the concessionary licence scheme for the over 75s. It axed the scheme, ignored mass protests and has no democratic accountability. Government should be politically accountable for benefits, not a media company. Take back control.

This petition is supported by Silver Voices, which has been leading the protests against the scrapping of free TV licences for the over 75s. Over one million over 75s' households are either refusing, or are unable, to pay the £157-50 fee. Many will have to choose between heating, food and their constant companion the TV. Poverty and loneliness will increase among older people as a result of this cruel policy. Both the Government and the BBC have broken their pledges to keep this benefit.

The Government responded to this petition on Tuesday 16th March 2021

From June 2020, the BBC is responsible for setting out and paying for any concession providing free TV licences to those aged 75 and over. The BBC consulted widely on the future of the concession.

In the 2015 funding settlement, the government agreed with the BBC that responsibility for the concession will transfer to the BBC in June 2020. The government and the BBC agreed this is a fair deal for the BBC - in return we closed the iPlayer loophole, committed to increase the licence fee in line with inflation, and reduced a number of other spending commitments. At the time, the former Director General of the BBC Lord Hall said on the Today programme that the agreement was a ‘strong deal’ which provided the BBC with ‘financial stability’.

This reform was subject to public discussion and debated extensively during the passage of the Digital Economy Act 2017 through Parliament. This legislation therefore provides that the future of the concession is the responsibility of the BBC, not of the government, and we have no further plans to review this at this time.

From 20 November 2018 to 12 February 2019, the BBC held an open consultation on the over 75 licence fee concession and options for the future concession. The BBC consulted on three key options: maintaining the concession; restoring a universal licence fee; and reforming the concession of a discounted licence for older people by raising the age threshold or making eligibility based on means-testing. More than 190,000 people responded to the consultation, including 115 stakeholders such as 38 Degrees and Age UK.

Following the public consultation, the BBC Board decided that from June 2020, any household with someone aged over 75 who receives Pension Credit will be entitled to a free TV licence paid for by the BBC. However, recognising the circumstances posed by the national Coronavirus situation, the BBC Board decided to change the start date of the new policy, which came into effect on 1 August 2020.

The Government is deeply disappointed with the BBC's decision to restrict the over 75 licence fee concession to only those in receipt of pension credit. We recognise the value of free TV licences for over-75s and believe they should be funded by the BBC. The BBC must look further at how it uses its substantial licence fee income to support older people.

This is a revised response. The Petitions Committee requested a response which more directly addressed the request of the petition. You can find the original response towards the bottom of the petition page (https://petition.parliament.uk/petitions/562729)