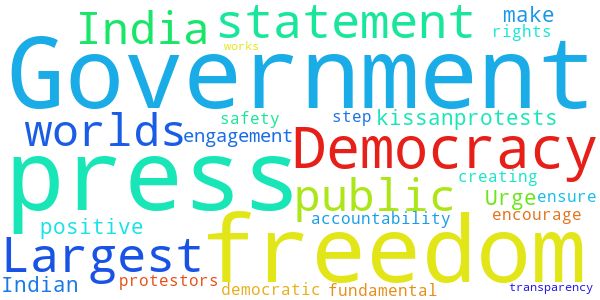 The Government must make a public statement on the #kissanprotests & press freedoms.

India is the worlds largest democracy & democratic engagement and freedom of the press are fundamental rights and a positive step towards creating a India that works for all.

A public statement by the Government will encourage transparency & accountability in the worlds Largest Democracy.

The Government responded to this petition on Monday 15th February 2021

Media freedom and the right to protest are essential to robust democracies such as the UK and India. Governments have the power to enforce law and order if a protest crosses the line into illegality.

The UK Government is conscious of the level of concern regarding the farmers’ protests in India. We appreciate that there are strong feelings in the United Kingdom towards the issue and that many British citizens have family ties to farming communities in India.

Through our High Commission in New Delhi and Deputy High Commissions across India, the Government is following developments closely. We understand that the Government of India has held several rounds of talks with farmers’ unions, and that in January the Supreme Court put three farming laws on hold and designated an expert committee to scrutinise the laws.
As would be expected between close partners, we have constructive discussions on a wide range of issues with India. The UK considers farming reform a matter for the Government of India. We consider the right to peaceful protest, freedom of speech, and internet freedom vital in any democracy. We also recognise that governments have the power to enforce law and order if a protest crosses the line into illegality. We look to the Indian government to uphold all freedoms and rights guaranteed in India’s strong constitution.

The Foreign Secretary discussed the farmers’ protests with his Indian counterpart during his visit to India in December 2020. Lord (Tariq) Ahmad of Wimbledon, Minister of State responsible for South Asia and for Human Rights, speaks regularly to his opposite number in the Ministry of External Affairs and to the Indian High Commissioner in the UK. Human rights issues form part of their dialogue.

An independent media is essential to any robust democracy. The UK is committed to media freedom, and to championing democracy and human rights around the world. In 2018, the UK Government launched the Media Freedom Campaign to shine a global spotlight on media freedom and increase the cost to those abusing media freedom and persecuting journalists.

We regularly engage with India’s vibrant media, which promotes lively debate across the political spectrum. The British High Commission has undertaken project work such as the annual South Asia Journalism Fellowship Programme, under our flagship Chevening scholarship programme, which funded 17 fellows, including seven from India in 2019. In 2020, we supported the Thomson Reuters Foundation to run workshops for journalists to report on a range of human rights matters.

This petition was debated in Parliament on Monday 8th March 2021