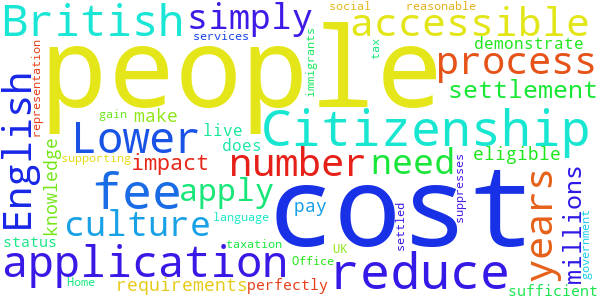 Lower the cost of British Citizenship applications to £372.

Lower the cost of British Citizenship applications to £372.

The government should lower the fees of citizenship to make it more accessible for the people eligible. It only costs the Home Office £372 to process the application.

To gain settled status people need to live in the UK for at least 5 years and demonstrate sufficient knowledge of the English language and British culture. After settlement, they can then apply for Citizenship. These requirements are perfectly reasonable but the cost is not. This fee does not reduce the number of immigrants or reduce the impact on social services. It simply suppresses millions of people who pay tax. Why are we supporting a system of taxation without representation?

The Government responded to this petition on Friday 5th February 2021

All fees are kept under review, however there are no current plans to lower the cost of British Citizenship applications to £372.

The Government believes it is right those who use and benefit directly from the Border, Immigration and Citizenship system contribute towards meeting the costs, thereby reducing the burden on the UK taxpayer.

The Immigration Act 2014 provides that nationality fees should be set taking into account the costs of considering an application, in addition to the benefits of becoming a British citizen and wider costs of operating the Border, Immigration and Citizenship system. They are not set to reduce migration or fund social services.

The principle of charging at above cost has been in place for over a decade and has been approved by Parliament.

Being recognised as a British citizen is an important and defining moment in a person’s life and British nationality brings many benefits which applicants value highly. These benefits include eligibility for a British passport, the right to vote in general elections and eligibility for consular support outside of the UK.

While the Home Office acknowledges applicants may wish to apply to become British, citizenship, or registration of citizenship is a choice, and not necessary to live, study or work in the UK. Applicants are therefore expected to pay the specified fee. Fee waivers, exceptions and reductions not extended to citizenship applications, except in very limited circumstances.