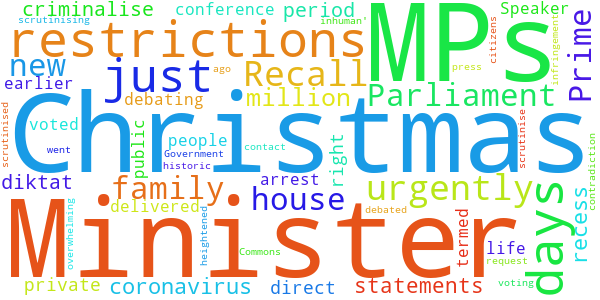 Ministers must urgently request that the Speaker recall Parliament, due to the overwhelming public interest in MPs scrutinising, debating and voting on the Government's new coronavirus restrictions that criminalise family contact over the Christmas period.

The Prime Minister's diktat, delivered via a press conference, has put 20 million people under house arrest just days before Christmas, and millions more under heightened restrictions, in direct contradiction to statements he made days earlier in the House of Commons before MPs went on recess.

This historic infringement on citizens’ right to a private and family life at Christmas - termed 'inhuman' just days ago by the Prime Minister - must be urgently scrutinised, debated and voted on by MPs.

The Government responded to this petition on Monday 11th January 2021

At the Government's request, Parliament was recalled on 30 December and 6 January. Regulations relating to covid-19 restrictions and measures for a national lockdown were debated respectively by MPs.

The Covid-19 pandemic has created unprecedented challenges for the UK Government, the devolved administrations and for the public bodies of the UK. Throughout, it has been vital to take urgent action to stop the virus spreading, protect the NHS and save lives. On Saturday 19 December the Prime Minister announced the introduction of Tier 4 restrictions in London, and the South East and East of England, as well as amended rules across England for mixing households over the Christmas period. This was a very difficult decision, taken swiftly in light of the latest data on the spread of the newly identified variant of Covid-19.

The Government has committed to, where possible, make time for parliamentary debate and approval of significant national measures with effect in the whole of England or UK-wide before they come into force. However, the necessity of acting quickly in response to the virus means that the Government must act speedily when required, including sometimes during parliamentary recesses. Such decisions are not taken lightly and there remain opportunities for parliamentarians to debate measures once both Houses return.

In this instance, Members were kept up to date on the new regulations through briefing sessions from the Health Secretary and the Minister for the Cabinet Office over the weekend of 19 and 20 December, as well as via a letter from the Prime Minister.

The Speaker granted a recall of Parliament on 30 December. The Health Secretary came to the House to make a statement updating members on the new restrictions and public health regulations relating to these restrictions were debated and scrutinsed by MPs.

Further to this, Parliament was recalled again on 6 January to allow the Prime Minister to make a statement to the House and for MPs to consider further public health measures in England.