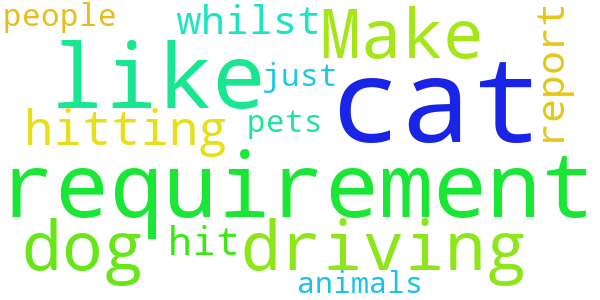 Make it a requirement to report hitting a cat whilst driving

Make it a requirement to report hitting a cat whilst driving

Make it a requirement to report hitting a cat whilst driving, like it is when you hit a dog or some other animals. Cats are people's pets just like dogs.

The Government responded to this petition on Tuesday 27th April 2021

The Government has no current plans to amend the Road Traffic Act 1988 (the Act) to grant cats the same status as dogs and other animals mentioned in the Act.

A main focus for this Government is to make our roads safer for all users, which will in turn reduce the risk to all animals.

Under section 170 of the Road Traffic Act 1988, a driver is required to stop and report an accident involving specified animals including horses, cattle, asses, mules, sheep, pigs, goats or dogs, but not cats or wild animals. This requirement arises from their status as working animals rather than as domestic pets. To introduce such a measure within the provision of section 170, would require primary legislation.

Having a law making it a requirement to report road accidents involving cats would be very difficult to enforce and we have reservations about the difference it would make to the behaviour of drivers, who are aware that they have run over a cat and do not report it.

Although there is no obligation to report all animal deaths on roads, Rule 286 of The Highway Code advises drivers to report any accident involving an animal to the police, and if possible, they should make enquiries to ascertain the owner of domestic animals, such as cats, and advise them of the situation.

The Government understands the distress of owners who lose a beloved pet. Cats and dogs often become members of the family and it is a great source of worry and uncertainty when they are lost. The Government strongly supports the campaigns by Cats Protection and others for people to voluntarily microchip their cats as the key method for identifying the cat and linking it to its owner. The Department for Environment, Food and Rural Affairs will shortly be publishing the results of their call for evidence on compulsory microchipping cats in England, which seeks to understand the consequences of making owners get their cats microchipped in England.