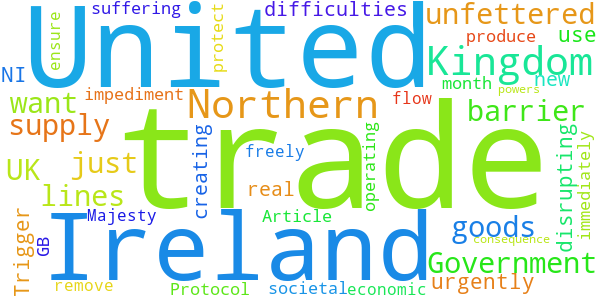 Her Majesty's Government must immediately remove any impediment or barrier to unfettered trade within the United Kingdom.

After just one month, Northern Ireland is suffering real economic and societal difficulties as a consequence of the Northern Ireland Protocol operating and creating new barriers to unfettered trade within the United Kingdom and disrupting supply lines of goods to Northern Ireland.

The Government should use all the powers it has to move urgently to protect UK trade and to ensure all UK goods and produce can freely flow to and from every part of the United Kingdom.

The Government responded to this petition on Monday 22nd February 2021

The UK is working to address outstanding issues with the Protocol - putting the interests of the people of Northern Ireland first, and considering all avenues necessary to do so.

The Protocol on Ireland/Northern Ireland was agreed as a unique solution to the issues arising from the UK’s withdrawal from the EU. It aims at upholding the Belfast (Good Friday) Agreement in all its aspects; safeguarding Northern Ireland’s integral place in the United Kingdom, its customs territory and internal market; and preventing a hard border on the island of Ireland.

In order to do so, it must be given effect in a pragmatic and proportionate way: one which effectively implements the guarantee in the Protocol itself of unfettered access from Northern Ireland to the rest of the United Kingdom, and which maintains the effective flow of trade from Great Britain to Northern Ireland.

This has been the basis on which the UK Government has and will continue to give effect to its obligations under the Protocol: providing the basis for goods to move effectively between Great Britain and Northern Ireland; and providing extensive support to traders, for example through the Trader Support Service and Movement Assistance Scheme, to adapt to new requirements. In particular, working closely with businesses and individuals right across Northern Ireland, steps have been taken to address issues that emerged after 1 January this year, for example practical mitigations on groupage; on steel movements; and to maintain the operation of the VAT margin scheme.

On 29 January, however, the EU’s invocation of Article 16 and attempt to impose processes related to the border on the island of Ireland, however quickly withdrawn and replaced, caused shock and anger right across Northern Ireland and indeed beyond. This has significantly undermined the operation of the Protocol and cross community confidence in it.
It is therefore right and urgent that steps are taken to address concerns raised about the operation of the Protocol. This is necessary to restore confidence and reflect the commitment in the Protocol itself to ensure that its application should impact as little as possible on the everyday life of communities in Ireland and Northern Ireland.

Having underscored the need for action, work is now under way with the EU with the shared objective of dealing with the impact of the decisions taken on 29 January and of finding workable solutions to the ongoing problems. A meeting of the UK-EU Withdrawal Agreement Joint Committee will be convened on 24 February to provide the necessary political steer and approval to this work. The Joint Committee co-chairs also held meetings with business and civic society on 18 February where they heard a wide range of views to inform their discussions.

The UK Government has and will continue to listen very carefully to voices across Northern Ireland through direct engagements with the Northern Ireland Executive, business and civil society.

As we have set out publicly, the UK will always consider all instruments at our disposal, including invoking Article 16 if necessary, to protect the interests of the people of Northern Ireland and safeguard the effective movement of goods, people, services and capital throughout the United Kingdom.

This petition was debated in Parliament on Monday 22nd February 2021