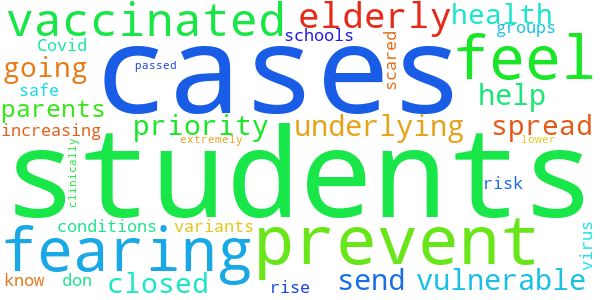 Keep schools closed until May

Keep schools closed until May

Please don’t send students back until we know we have had the priority groups vaccinated such as the elderly, the extremely clinically vulnerable, and those with underlying health conditions.

Even as Covid cases are going down, students do not feel safe. Please lower the risk of the cases increasing again after we go back. Many students are scared, fearing that cases may rise again and this can be passed on to parents. This would help prevent the spread of the variants of the virus.

The Government responded to this petition on Monday 15th March 2021

With safety measures in schools, the success of vaccination rollout and decrease in infection rates and hospitalisations, the Government has decided that pupils can return to education from 8 March.

The education of children and young people is a national priority. The unavoidable disruption to education caused by the COVID-19 pandemic will have affected children’s education and wellbeing. Enabling pupils to return to face to face education is key to helping them, and the country as whole, thrive in the future. As pupils return, schools will be supported with over £1 billion to help pupils to recover missed education and development.

At the beginning of 2021, when we asked schools to limit attendance to vulnerable children and young people and the children of critical workers, the rate of infections was rising quickly, and the NHS was in danger of being overwhelmed. It was a vital intervention to bring down the number of social contacts and was not because schools had become inherently less safe. At that time, we said that we would return all pupils to school as soon as the health situation improved. As a result of the efforts the country has made, the Prime Minister’s four tests have been met and it is now possible for schools to welcome back pupils in all year groups from 8 March.

By 12 March, 23 million people had received their first vaccine dose and 1 million people had received their second dose. Ninety percent of people aged 70 and over, which is the age group with the highest risk of complications from COVID-19 infection, have had their first dose. Public Health England (PHE) has been studying the effect of the vaccine roll out. It has found encouraging evidence that people who have been vaccinated are much less likely to need to go to hospital and are less likely to die if they do catch COVID-19. Our latest information also suggests that infection rates across the country have fallen across all age groups.

The longer children are out of the classroom the bigger the effect on their education, health and wellbeing. The Chief Medical Officer for England has recently stated that: "The chances of many children being damaged by not going to school are incredibly clear and therefore the balance of risk is very strongly in favour of children going to school because many more are likely to be harmed by not going than harmed by going, even during this pandemic."

Even though transmission of the virus can happen in schools, evidence shows that this does not mean more infections spreading in the wider community. We have worked closely with PHE to develop a system of controls that help keep pupils and school staff as safe as possible and have further strengthened the measures to provide more reassurance and help decrease the disruption the virus causes to education. As schools prepare for the return of more pupils, they should update their risk assessment and ensure they are implementing the system of controls in order to minimise the risk of infection. The system of controls include cleaning hands more often, minimising contact and keeping occupied spaces well ventilated, as well as wearing face coverings where recommended. For secondary pupils, this includes staff and pupils wearing face coverings anywhere indoors where social distancing is not possible, including in classrooms.

Our new programme of rapid testing is going to continue to be an important part of how we keep infection rates down within schools and across the wider community. Since January we have been delivering rapid testing kits for secondary schools and colleges to help identify pupils or staff who are infected but may not yet show any symptoms. Pupils returning to secondary schools from 8 March will be offered a rapid test before their face-to-face teaching restarts. After the initial programme of three tests in school, pupils will be provided with 2 rapid tests to use each week at home. All staff in schools are now able to be tested twice a week.

The benefit of the rapid testing programme is that we can identify pupils and staff who might be carrying the virus but who are not yet showing symptoms. This means we can require those who test positive to self-isolate straight away and help ensure they are not passing the virus on in school.

As we work together to help pupils return to school after a long period of education at home, we will be asking everyone to adhere to the safety measures put in place. Head teachers, teachers and other school staff have been working hard to make their schools as safe as they can be, and it is vital that everyone continues to do everything they can to help stop the spread of the virus.

This petition was debated in Parliament on Monday 15th March 2021