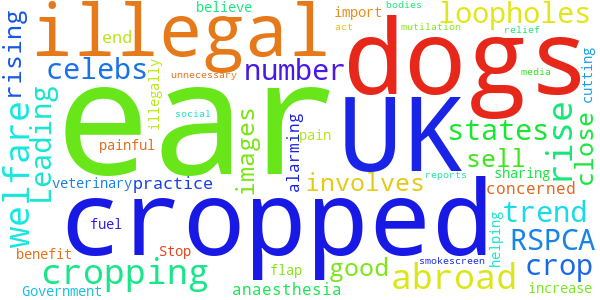 Stop the rising number of ear-cropped dogs in the UK

Stop the rising number of ear-cropped dogs in the UK

Leading veterinary and welfare bodies are concerned by the alarming rise in ear-cropped dogs in the UK. Ear cropping is illegal in the UK and an unnecessary, painful mutilation with no welfare benefit. The practice involves cutting off part of the ear flap, often without anaesthesia or pain relief.

The RSPCA states a 621% increase in reports of ear cropping from 2015 to 2020. We believe a rise in UK celebs sharing images of their cropped dogs on social media is helping to fuel this. While illegal to crop in the UK, it’s not illegal to sell ear-cropped dogs, import them from abroad or take dogs abroad to be cropped. These loopholes act as a smokescreen for those illegally cropping in UK. We call on the Government to close these loopholes and end the trend in ear-cropped dogs for good.

The Government responded to this petition on Tuesday 9th March 2021

The Government welcomes further evidence on this abhorrent practice from the RSPCA. We will also explore options to tackle the import of mutilated dogs, consistent with World Trade Organisation rules.

The practice of mutilating dogs’ ears is abhorrent and has rightly been banned in the UK for 15 years.

We already have some of the world’s highest animal welfare standards. Now we have left the EU we have the opportunity to consider options regarding the importation and commercial movements of dogs with cropped ears into Great Britain.

The maximum penalty for causing unnecessary suffering to an animal or cropping a dog’s ears is 6 months’ imprisonment and/or an unlimited fine. However, the Government is committed to increasing the maximum custodial penalty for both of these offences from six months to five years. The Animal Welfare (Sentencing) Bill, currently before Parliament, will continue to receive Government support as it completes its passage through Parliament.

Equally, the Government has powers to intervene on animal welfare grounds. Importers of animals must adhere to welfare standards as set out in Council Regulation (EC) 1/2005 on the protection of animals during transport and in domestic legislation, The Welfare of Animals (Transport) (England) Order 2006 (WATEO). This legislation aims to protect the health and welfare of animals during transportation and applies to dogs that are suffering injury as a result of non-exempted mutilations.

The Government will engage with stakeholders, including the RSPCA, to understand the extent to which dogs are having their ears cropped in breach of the law in this country. Now the Transition Period has ended, we also have the opportunity to consider options regarding this abhorrent practice for imported dogs, in line with World Trade Organisation rules and would welcome further evidence from stakeholders and the public on this issue. The Government is taking steps to ensure that the illegal importation of pets is stopped, and that pets brought into the UK through legal means receive a high standard of care.

The Government also continues to raise awareness regarding the improper selling of pets by deceitful sellers in the UK and abroad through our ‘Petfished’ campaign, which seeks to educate prospective pet buyers on common tricks and tactics used by deceitful sellers which may result in the purchase of a mistreated or unwell pet including those who have been subject to cropping. The campaign urges buyers to mitigate risks, for example by buying from trusted sellers such as those under the Kennel Club’s Assured Breeder scheme, viewing puppies with their mothers and siblings, asking questions of the seller and following the Animal Welfare Foundation and RSPCA Puppy Contract to ensure that puppies are in good health when purchased.

This petition was debated in Parliament on Monday 7th June 2021