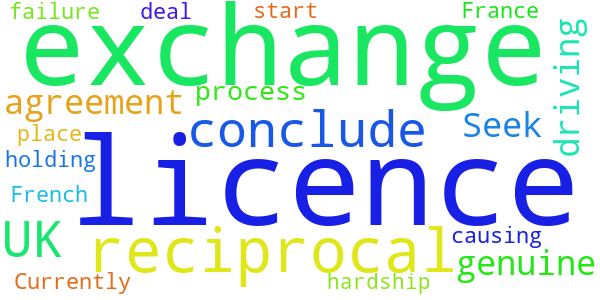 Currently no one holding a UK licence can exchange it for a French licence due to the failure to have the reciprocal agreement in place before 01/01/2021. This is causing genuine hardship to many.

Seek to conclude the deal so the exchange process can start again.

The Government responded to this petition on Thursday 8th April 2021

The Government is committed to establishing arrangements with France, that facilitate private motoring with the minimum of bureaucracy, as soon as possible.

The Government is committed to establishing reciprocal arrangements with France that facilitate private motoring with the minimum of bureaucracy. At the end of 2020, the Department had successfully agreed arrangements with France for the mutual recognition of photocard licences. As such, UK photocard licence holders will not need to carry an additional International Driving Permit (IDP) when driving in France – nor any EU Member State.

For UK residents in France, we have secured interim arrangements which will allow UK licence holders’ to continue to use their UK licence until 1 January 2022, provided that it remains valid in the UK. There is therefore no requirement for these valid UK licences to be exchanged during this period, until a reciprocal agreement is reached between the United Kingdom and France. We are working with the French government to finalise this agreement.

These interim arrangements however do not extend to those UK residents whose licence has expired, and we are aware that this is causing difficulty for a number of UK residents in France. We are working closely with the French Government to explore solutions for those with expired licences and the Government commits to providing an update as soon as possible. In the meantime, the Department for Transport are working with the British Embassy in Paris to clarify the approach to exchanging UK licences in France and updates will be made to the Living in France guide and the the driving licence section on Gov.uk.