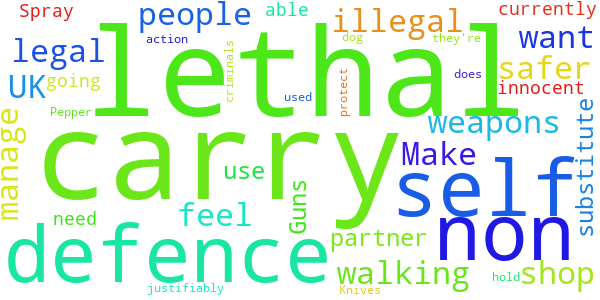 Make it legal to carry non-lethal self defence weapons

Make it legal to carry non-lethal self defence weapons

In the UK, it is illegal to carry non-lethal self defence weapons such as Pepper Spray. I want this to be made legal if used only in the action of self-defence.

Because people need to feel safer when they're walking out and about. I want my partner to feel safer walking the dog or going to the shop than she currently does.

Guns and Knives are justifiably illegal to carry in the UK but criminals still manage to get hold of them to use, innocent people should be able to protect themselves with a non-lethal substitute.

The Government responded to this petition on Thursday 25th March 2021

The Government is taking determined action to make our streets safer. But sprays containing noxious substances are dangerous and we have no plans to allow people to carry them for self-defence.

In the wrong hands, items such as pepper sprays can be dangerous and cause serious injury. That is why their possession is prohibited under firearms law.

It has been the view of successive governments for many years that the private possession of firearms, including sprays, or other weapons for personal protection is likely to lead to an increase in levels of violence. While an individual may wish to carry items for their own protection, we strongly discourage this as the item could itself be used against that person with serious consequences. Such items, if widely available to everybody, could be used to incapacitate people in order to carry out criminal acts.

This country has some of the toughest firearms controls in the world and while the Government keeps them under constant review to safeguard against abuse by criminals and to preserve public safety, we have no plans to change the law to allow people to carry items such as pepper sprays or other weapons for personal protection.

The Government’s focus is squarely on cutting crime and keeping people safe, which is why we are recruiting 20,000 more police officers, introducing new stop and search powers, and giving the police the resources they need to tackle violent criminals.

We are also focusing on tackling the underlying causes of serious violence, investing in new intervention programmes to stop young people committing these crimes in the first place.

The work also includes specific action to tackle violence against women and girls. This includes reopening the Government’s Call for Evidence to inform its new strategy to tackle Violence Against Women and Girls. The new strategy will be published later this year and will drive a step-change in the response to these crimes. This will be followed by a dedicated, complementary Domestic Abuse Strategy.

The Government is also taking immediate steps following the Prime Minister-chaired Criminal Justice Taskforce on 15 March. This includes more than doubling the size of the Safer Streets fund, which provides neighbourhood measures such as better lighting and CCTV. This will bring the funding for these local projects to £45 million, alongside a commitment from the Government to work with police forces and Police and Crime Commissioners to ensure the projects target areas of potential concern for women and girls and are more focused on preventing sexual violence. This could include targeting parks and alleyways, and routes from bars, restaurants and nightclubs as we see a return to the night-time economy, in line with the lifting of coronavirus restrictions. The Policing Minister will hold a summit in the coming weeks with police and industry representatives from the night-time economy on preparations to protect women as pandemic restrictions lift.

We have introduced a landmark Domestic Abuse Bill which will bolster our response to domestic abuse on every level, strengthening protections for victims whilst also ensuring perpetrators feel the full force of the law. We have also introduced new Stalking Protection Orders, Sexual Risk Orders and Sexual Harm Prevention Orders, and doubled the maximum sentences for stalking and harassment to ten years. We’ve created new offences on Coercive and Controlling Behaviour, failing to protect a girl from FGM, and more. The end-to-end Rape Review, which will be published this Spring, is looking at how every stage of the criminal justice system handles rape cases from police report to final outcome at court.