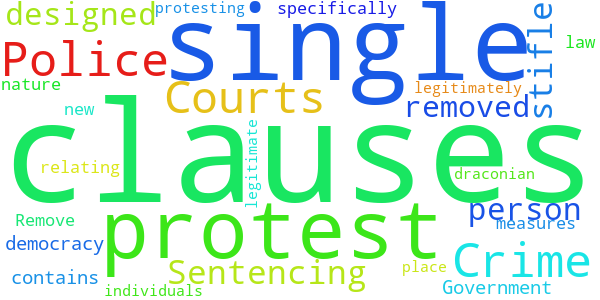 The Government’s new Police, Crime, Sentencing and Courts Bill contains clauses designed specifically to stifle single individuals legitimately protesting. These clauses should be removed from the Bill before it becomes law

These clauses relating to single person protests are draconian in nature and are designed to stifle legitimate protest.

Such measures have no place in a democracy

The Government responded to this petition on Tuesday 6th April 2021

The Police, Crime, Sentencing and Courts Bill does not erode the right to protest peacefully; the Government will not be removing protest measures from the Bill.

The right to protest peacefully is a cornerstone of our democracy and the Government is absolutely committed to maintaining freedom of expression. However, where the levels of continual noise during protests prevent organisations from conducting their daily business or have a significant impact on others’ wellbeing, this is unacceptable.

In a recent inspection, the independent policing inspectorate, Her Majesty’s Inspectorate of Constabulary, Fire & Rescue Services (HMICFRS) found that the rights of protesters are sometimes prioritised over the rights of local residents, businesses, and those with opposing views, and recommended a ‘modest reset’ of the balance. This is what this Bill is designed to achieve.

This Bill will enable the police to manage disruptive protests more effectively. Clause 60, Imposing conditions on one-person protests, enables the police to impose conditions on single person protests if they reasonably believe that the noise generated by the protest may result in serious disruption to the activities of an organisation or it may cause intimidation, harassment, or serious unease; alarm; or distress.

For both these triggers, the police will need to pay due regard to the number of people affected and the intensity and duration of the impact caused by the noise. The police will only be able to impose conditions on the use of noise in the extreme cases where noise causes unjustifiable disruption or has a significant impact on those in the vicinity, as defined in the Bill. The vast majority of protests, including those carried out by a single individual will be able to continue making noise as they currently do.

The police will continue to be required to pay due regard to Human Rights obligations, namely articles 10 and 11 of the European Convention on Human Rights on freedom of expression and assembly, when making use of any powers to manage protests and they must be able to show that their use of powers is necessary and proportionate.