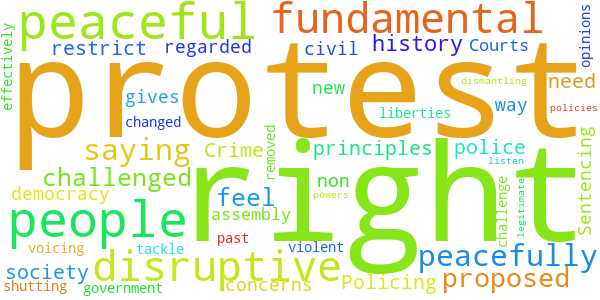 Do not restrict our rights to peaceful protest.

Do not restrict our rights to peaceful protest.

The right to peaceful assembly and protest are fundamental principles of any democracy and the proposed part of this bill that gives the police new powers to tackle disruptive peaceful protests should be removed from The Policing, Crime, Sentencing and Courts Bill.

Why is a non-violent protest regarded as disruptive? Protests are a fundamental right to our society and have been through history. It is how policies have been challenged and changed in the past. Without them, you are effectively saying nobody has the right to peacefully challenge anything. If people feel the need to protest then the government should listen and not be shutting down this legitimate way of people voicing their concerns and opinions. This is a dismantling of our civil liberties.

The Government responded to this petition on Tuesday 6th April 2021

The public order measures in the Police, Crime, Sentencing and Courts Bill do not erode the public’s right to protest; the Government will not be removing these measures from the Bill.

The right to protest is a cornerstone of British democracy and the Government is absolutely committed to maintaining freedoms of expression and assembly. This Bill will enable the police to manage disruptive protests more effectively. The majority of protests in England and Wales will be unaffected by the proposed measures in the Police, Crime, Sentencing and Courts Bill. They will not stop people from carrying out their civic right to protest and be heard.

Existing public order legislation was passed in 1986 and is no longer suitable for managing all the types of protests we experience today. We aim to ensure that legislation remains fit for purpose.

In recent years, we have seen a growing trend in protest groups using highly disruptive tactics that have a detrimental impact on the fundamental rights of others. The misery caused to millions of people by protesters gluing themselves to train carriages, blocking traffic, including emergency vehicles, and preventing newspapers from being distributed is totally unacceptable.

In a recent inspection, the independent policing inspectorate, Her Majesty’s Inspectorate of Constabulary, Fire & Rescue Services (HMICFRS) found that the rights of protesters are sometimes prioritised over the rights of local residents, businesses, and those with opposing views, and recommended a ‘modest reset’ of the balance. This is what this Bill is designed to achieve.

The proposed measures will allow police to better manage highly disruptive protests, protecting the legitimate rights of those affected by the protests whilst remaining compliant with the European Convention on Human Rights.

Articles 10 and 11 of the European Convention on Human Rights set out that everyone has the right to freedom of expression and of peaceful assembly and association with others. However, these freedoms are not absolute, and restrictions may be placed for the protection of the rights and freedoms of others.

The police will continue to be required to pay due regard to Human Rights obligations when making use of any powers to manage protests and they must be able to show that their use of powers is necessary and proportionate.

This petition was debated in Parliament on Monday 26th April 2021