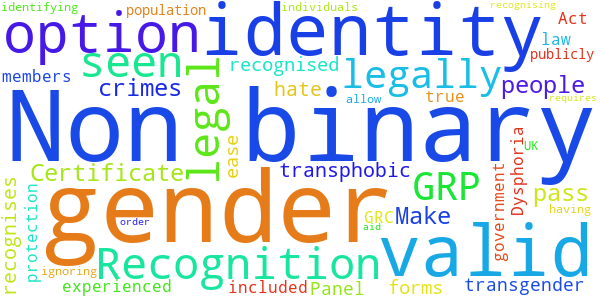 Make non-binary a legally recognised gender identity in the UK

Make non-binary a legally recognised gender identity in the UK

There is no option of ‘Non-binary’ on legal forms, ignoring members of the population. This requires the government to pass a law that publicly recognises ‘Non-binary’ as a part of the GRP under the Gender Recognition Act, a.k.a a legal and valid gender identity option. By recognising Non-binary as a valid gender identity, it would aid in the protection of Non-binary individuals against transphobic hate crimes, and would ease Gender Dysphoria experienced by Non-binary people.

The Government responded to this petition on Thursday 20th May 2021

As set out in the response to the Gender Recognition Act consultation, there are no plans to make changes to the 2004 Act.

Following a considerable amount of consultation with the public and representative organisations, the Government decided that the current provisions within the GRA allow for those that wish to legally change their sex to do so fairly.

The 2018 GRA consultation did not bring forward any proposals to extend the GRA to provide legal recognition to a third, or non-binary, gender. The Government noted that there were complex practical consequences for other areas of the law, service provision and public life if provision were to be made for non-binary gender recognition in the GRA.

This Government wants everybody in the UK to feel safe and confident to be themselves.

We are committed to tackling all forms of homophobic, biphobic and transphobic hate crime, and are working with the Home Office on the cross-Government Hate Crime Action Plan. The Government has asked the Law Commission to review the current hate crime legislation, which includes exploring whether homophobic, biphobic and transphobic hate crime should be considered an aggravated offence. We will also take an assessment of local support for hate crime victims and improve reporting and recording of LGBT hate crimes through supporting additional police training.

This Government is committed to supporting all LGBT people, tackling discrimination and improving the lives of all citizens.