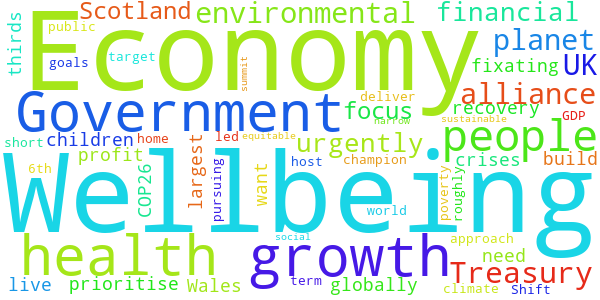 Shift to a Wellbeing Economy: put the health of people and planet first

Shift to a Wellbeing Economy: put the health of people and planet first

We urgently need the Government to prioritise the health and wellbeing of people and planet, by pursuing a Wellbeing Economy approach. To deliver a sustainable and equitable recovery, the Treasury should target social and environmental goals, rather than fixating on short-term profit and growth.

A narrow focus on GDP growth has led us to environmental, health and financial crises. The UK is the 6th largest economy in the world, yet roughly a third of our children live in poverty. Two thirds of the public want the Treasury to put wellbeing above growth. Scotland and Wales are already part of the Wellbeing Economy Governments alliance. As host of the COP26 climate summit, the UK Government should build and champion a Wellbeing Economy - at home and globally.

The Government responded to this petition on Tuesday 25th May 2021

While traditional economic measures such as GDP remain important, the government is committed to broadening the range of measures it uses, including by better accounting for natural and human capital.

Traditional economic measures, such as GDP, remain some of the most useful indicators of economic performance. GDP is closely correlated with employment, incomes and tax receipts and is comparable across time periods, making it useful for the government and Bank of England when setting economic policy and managing the public finances. During the current COVID-19 pandemic for example, GDP, along with a wide range of other economic indicators, has been used to inform government action aimed at mitigating the damaging effects of the pandemic on peoples’ wellbeing by supporting their jobs and livelihoods.

Nonetheless, the government recognises that GDP has its limitations and should not be seen as an all-encompassing measure of welfare – in fact this is something that GDP was never designed to be.

Sir Charles Bean’s 2016 Independent Review of Economic Statistics acknowledged some of GDP’s limitations, such as the challenge of capturing activities where no market transaction takes place and the fact that GDP estimates make no allowance for the depletion of natural resources that may be inherent in many forms of economic production. The full report can be found here: https://assets.publishing.service.gov.uk/government/uploads/system/uploads/attachment_data/file/507081/2904936_Bean_Review_Web_Accessible.pdf

The government fully supported the recommendations of the Bean review and, to date, has provided the ONS with an additional £25m to help improve UK economic statistics - including through an initiative called “Beyond GDP” that aims to address the limitations in GDP by developing broader measures of welfare and activity.

This includes developing a suite of personal well-being measures, better accounting for unpaid work and developing estimates for natural and human capital. More information on this initiative can be found here. https://blog.ons.gov.uk/2018/10/01/beyond-gdp-how-ons-is-developing-wider-measures-of-the-uk-economy/

As a result of this work, last year the UK became one of the first countries to publish natural capital accounts and these are now included in the UK National Accounts Blue Book. The ONS has also started to publish human capital accounts.

Additionally, recognising that protecting and enhancing our natural assets is crucial to achieving a sustainable, resilient economy, at Spring Statement 2019 the government commissioned an independent, global review on the economics of biodiversity. The Economics of Biodiversity: The Dasgupta Review was published in February and represents a strong example of UK thought-leadership on an important environmental issue with clear – but often overlooked – economic consequences. The government is currently examining the Review’s findings – including the options it sets out relating to improving measures of economic success to account for the goods and services derived from the natural environment – and will respond formally in due course.

As well as considering the metrics used to inform decision making, the government is also taking action directly to protect and enhance the natural world. For example, the recent Spending Review settlement increased Defra’s budgets by almost £1 billion. This will allow them to do more to harness the power of nature in the fight against climate change - and connect people with green spaces - by planting trees, restoring peatland, creating habitats, and investing in National Parks. This includes support to implement flagship Environment Bill measures including biodiversity net gain for development, new environmental targets, and the Office for Environmental Protection, which will provide annual independent reporting on the implementation of the government’s 25 Year Environment Plan, setting out what the government will do to improve the environment within a generation. The plan can be found here: https://www.gov.uk/government/publications/25-year-environment-plan

Furthermore, as COP Presidency this year, the UK is seeking to increase global climate action and environmental protection. By doing so, we are working to ensure that the recovery from COVID-19 is both sustainable and equitable and to propel the long-term transition to a net zero, resilient and environmentally sustainable global economy.