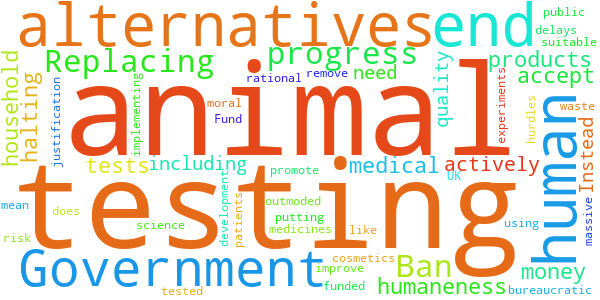 We would like the Government to ban all animal testing UK, including for the development of cosmetics, household products and medicines. Alternatives need to be actively funded. Many products that are tested on animals end up not being suitable for humans. Animal testing is outmoded and should end.

Testing on animals is a waste of public money and delays medical progress. Replacing animal tests does not have to mean putting human patients at risk or halting medical progress. Instead, replacing animal testing should improve the quality as well as the humaneness of our science. There are massive bureaucratic hurdles to implementing alternatives, which the Government could remove. There is no rational moral justification for using animals in experiments.

The Government responded to this petition on Wednesday 4th August 2021

Government believes scientific research using animals plays a vital part in our understanding of how biological systems work in health and disease. The use of animals in science supports the development of new medicines and cutting-edge medical technologies, for humans and animals, and the safety and sustainability of our environment. However, animals must only be used where there is no alternative. This is achieved through robust regulation, and support/funding for non- animal alternatives.

In the UK, no animal testing may be conducted except for a permissible purpose enshrined in law. These purposes include to: assess the safety of medicines or chemicals; protect the environment; allow the development of medicines; and conduct basic scientific research to understand how biological systems and processes work. Under UK law no animal testing may be conducted if there is a non-animal alternative available. The use of animals in such testing is strictly limited to that necessary to achieve the scientific benefits.

Animal testing is required by all global medicines regulators, including the UK’s Medicines and Healthcare products Regulatory Agency (MHRA), to protect human health and safety. Without the testing of potential medicines on animals the development, registration and marketing of new, safe, and effective medicines would not be possible. The animal species for testing of potential medicines are specifically chosen to give as much human relevant information as possible and to avoid species specific reactions which would not predict human effects. Many products which would unsafe or ineffective in humans are detected through animal testing thus avoiding harm to humans. Potential medicines fail in development for many reasons but the fact that medicines are stopped in development for reasons other than unsatisfactory animal testing does not mean that the testing is not essential.

Animal testing of cosmetics has been banned in the UK since 1998. Under UK law it is illegal to test cosmetic products, or their ingredients, on animals to meet the requirements of the Cosmetics Regulations 2009. Animal testing of chemicals is required under UK law, depending on the chemical itself and the quantity manufactured, to protect the safety of workers manufacturing or exposed to such material in high amounts and protect the environment when such chemicals may find their way into waterways, soil or the atmosphere. Animal testing is also required for academic researchers to understand how biological systems and pathways work. Without this basic research we would limit our ability to make scientific discoveries which eventually lead to new targets for drug discovery and development and the pipeline of new medicines.

The Government is committed to supporting, funding, and accelerating cutting edge technologies that allow animal use to be replaced or avoided. UK Research and Innovation (UKRI) provides core funding to the National Centre for the 3Rs (NC3Rs) which works nationally and internationally to drive the uptake of 3Rs technologies and ensure that advances in the 3Rs are reflected in policy, practice and regulations on animal research. In 2015, the non-animal technologies roadmap for the UK was published by Innovate UK and the NC3Rs, in partnership with a number of Research Councils, and the UK’s Defence, Science and Technology Laboratory. This sets out a strategy to accelerate the translation of technologies emerging from research into tests for assessing the safety and efficacy of chemicals (including medicines and drugs) without the use of animals. There is ongoing work led by the NC3Rs to review the impact of the £7 million invested as part of the roadmap for commercial feasibility and collaborative R&D projects. The findings of this review will be used to inform future activities in this area.

Since the NC3Rs was launched it has committed £100 million through its research, innovation, and early career awards to provide new 3Rs approaches for scientists in academia and industry to use. This includes almost £27 million in contracts through its CRACK IT Challenges innovation scheme to UK and EU-based institutions, mainly focusing on new approaches for the safety assessment of pharmaceuticals and chemicals that reduce the use of animals. The MHRA works closely with the NC3Rs in bringing together stakeholders in academia, industry, government and animal welfare organisations to facilitate the exchange of information and ideas, and the translation of research findings into practice that benefits both animals and science.

UKRI also funds a portfolio of research projects involving humans, human materials, animal models, and non-animal technologies. The Medical Research Council (MRC) has for more than a decade prioritised experimental medicine research, in which studies are undertaken directly in humans to identify disease mechanisms and provide early evidence and validity of new discoveries or treatments.